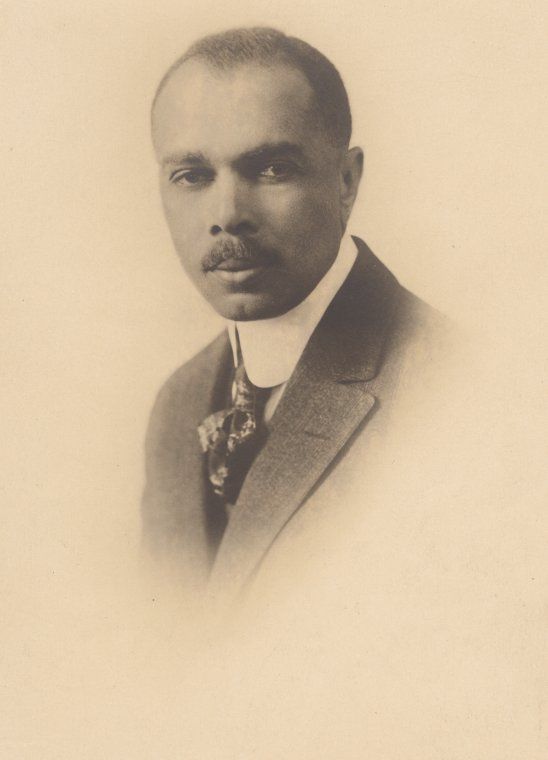 Lift every voice and sing

Till earth and heaven ring

Ring with the harmonies of Liberty

High as the listening skies

Let it resound loud as the rolling sea

-- "Lift Every Voice and Sing"

American writer and civil rights activist Jame Weldon Johnson (June 17, 1871 - June 26, 1938) began working for the National Association for the Advancement of Colored People (NAACP) in 1917 and became its executive secretary just three years later. A persuasive leader, he organized peaceful, mass demonstrations, among them the silent parade of thousands of African Americans on July 28, 1917, down Fifth Avenue in New York, to protest injustices. In the 1920's, Johnson was an influential member of the Harlem Renaissance; his famous poem, "Lift Ev'ry Voice and Sing", was adapted to music by his brother, only to become the unofficial "Negro National Anthem." He authored The Autobiography Of an Ex-Colored Man (1912); Fifty Years and Other Poems (1917); The Book of American Negro Poetry (1922); God's Trombones: Seven Negro Sermons in Verse (1927); Black Manhattan (1930); and Negro Americans, What Now? (1934). He also compiled and edited the anthology The Book of American Negro Spirituals (1925). Beyond his writings, Johnson was a teacher at Stanton Elementary School, Jacksonville, Florida; a lawyer, and first Black man admitted to the Florida Bar since Reconstruction; a songwriter, having composed over 200 songs for Broadway; and diplomat appointed by President Theodore Roosevelt to serve as United States Consul in Venezuela, and then, Nicaragua.

With the upcoming federal holiday of Juneteenth, also known as Emancipation Day, the oldest known commemoration of the freeing of enslaved people in the United States, it is fitting that we draw attention to the contributions of James Weldon Johnson who was born today, June 17th, 1871, for led an extraordinary life that embraced activism, education, diplomacy, and the arts.