Part One: The Rare 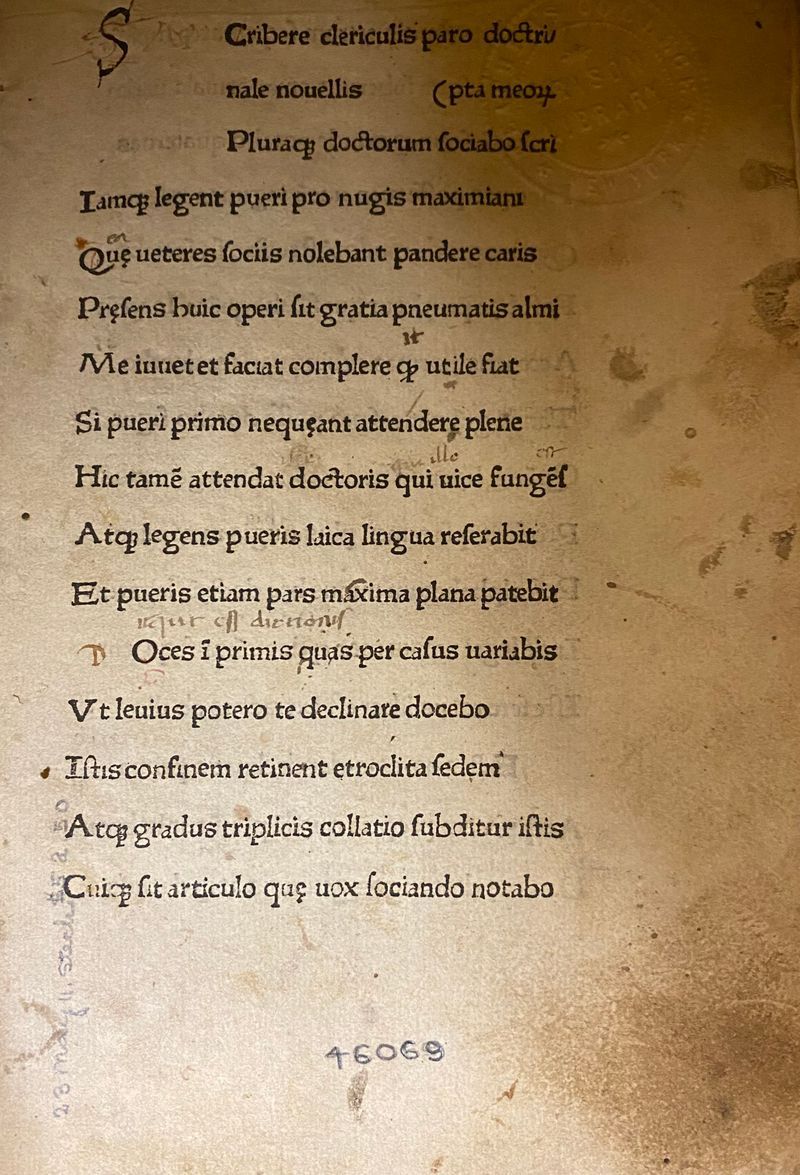 Within the closed stacks of Gottesman Libraries' collection, nestled between Margarita Philosophica by Gregor Reisch on one-side and Plurima Opuscula by Saint Augustine of Hippo on the other, sits the oldest manuscript of Teachers College manuscript collection, Doctrinale Puerorum.

Written by French author, teacher, and poet Alexander de Villedieu around 1200 A.D and published in 1475, the Doctrinale Puerorum (Teaching Manual for Boys) was considered a classic text of versified Latin grammar—a veritable "must have" for teaching the nuances of 13th century Latin to children. Villedieu wrote the entirety of the text in hexametric verse in order to assist in the popular pedagogical fashion of the time—mnemonic and rote memorization. The manual was such a success that it was reprinted in multiple editions and today "survives partially or in its entirety in over 400 manuscripts" [ibid].

Of our own Gottesman Libraries' edition, the antiquities book dealer of Berlin (ca. 1895) Max Harrwitz notes:

Roughly translated from the German:

"Rarity of the First Degree! A Latin textbook in hexameters. The copy is not entirely perfect,

although it is in exceptionally good condition as a school-book: Italian handwritten notes from the

16th century on some pages. The illuminator had not yet painted the initials on this example,

according to Prof. Dr. Reichling (according to the encloses letter)...printed between 1470-75, unknown

to the bibliographer Hyan, Copinger." 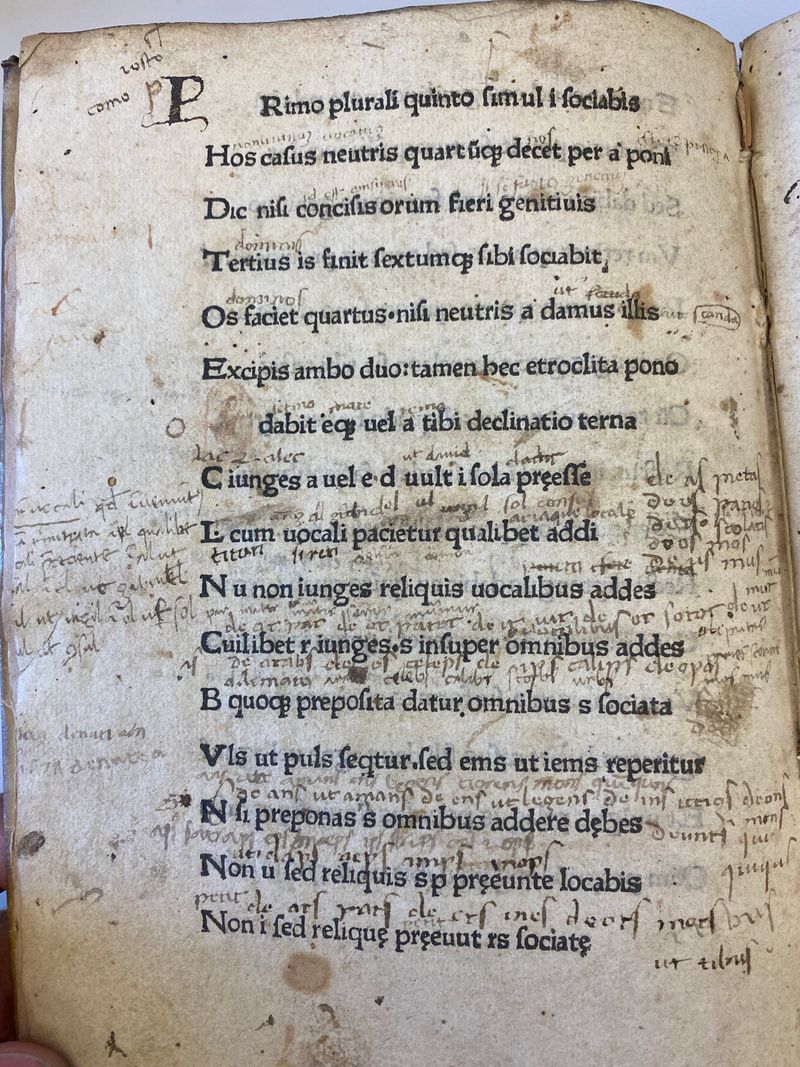 The precise provenance of our own edition, which lacks the illuminated illustrations as indicated, is unknown. However, we know that it came to Max Harrwitz by way of Professor Doctor Reichling around 1894. Though the script is difficult to decipher, there is a note attached by Reichling (see image, below) that likely provides some detail as to the edition, condition, and importance of the book.

I found a single, obscure reference to one Prof. Dr. Reichling (Münster, 1870) in a dissertation bibliography, The Archaism of Euripides (1906), which notes Reichling's academic contribution to the history and literary commentary of Johannes Murmellius, a 13th/14th century Dutch humanist. Are these two the same Professor Doctor Reichling? There could be a correlative assumption, based on the subject matter of Reichling's own academic pursuits and the likelihood of having such a manuscript as Doctrinale Puerorum in his collection, but a much deeper dive into local archives in Münster would be needed to develop a plausible and defensible narrative.

Additional information, in the form of libris notes within the manuscript (see image, below), indicates that it had been in the Bryson Library collection at some point after 1894—when the college relocated from No. 9 University Place to West 120th street.

A final document regarding acquisition emerged while combing the TCANA Vertical Files. These vertical files were compiled by librarians and consisting of folders full of loose leaf reference material that related to various difficult-to-search subjects.

The document—in the form of a draft of a Dean's Report written in 1908, and added to the Vertical Files in 1942—details the history and future state of collection development practices of Bryson Library. Without naming any specific titles, a single passage references the following:

"a special collection of text-books was started back in 1901...[o]ld textbooks are purchased as

opportunity and the library budget permit. Among the latter are school-books of the 18th and

I am fairly certain that Dean Russell was referencing Doctrinale Puerorum here, given the probable date as indicated on our card catalog record matches and that the manuscript is the single volume in our collection that sits in within that date range.

So, while this may not present itself as a seismic revelation, it is interesting to note that this volume, our oldest text, has been in our consistent stewardship for at least 115 years, if not longer and we can add a few more layers of context, revitalize the connection this manuscript has with the Gottesman Libraries' collection, and note a few more bibliographic nuances in our closed stacks catalog. 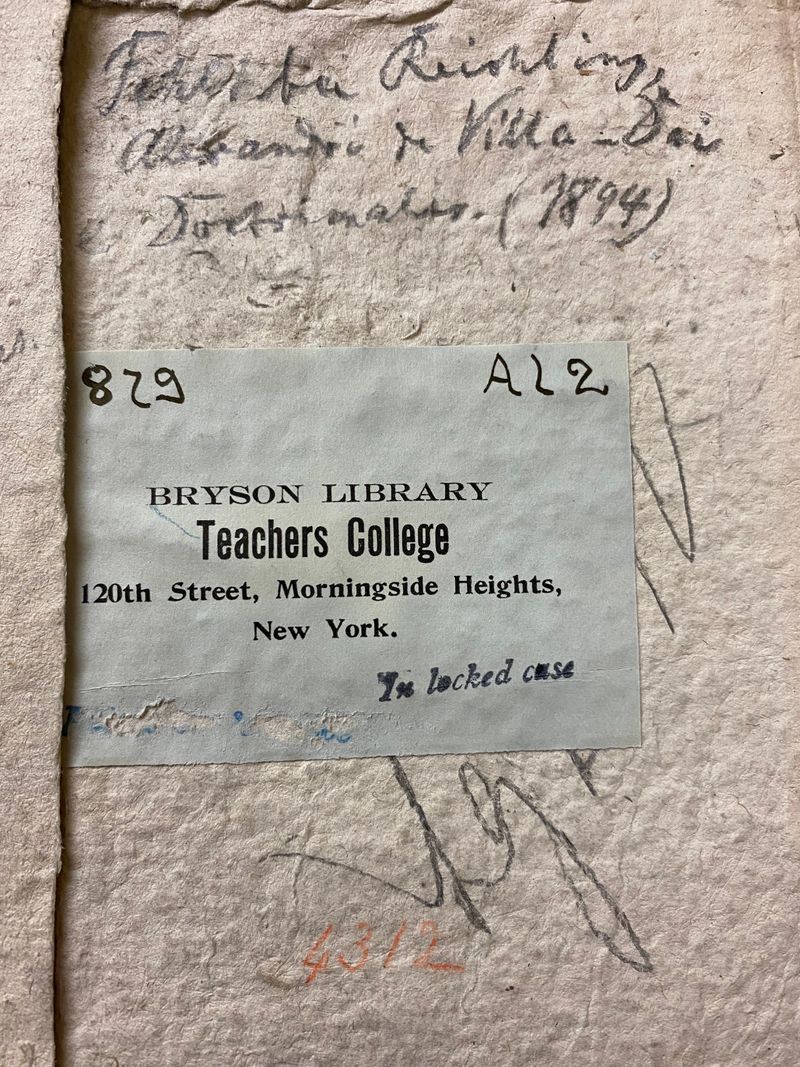 Posted in: Archives, Learning at the Library|By: Conrad Lochner|268 Reads