can we forget that flash?

suddenly 30,000 in the streets disappeared

in the crushed depths of darkness

when the swirling yellow smoke thinned

and a shoreless accumulation of rubble and embers - Hiroshima

before long, a line of naked bodies walking in groups, crying

corpses lie on the parade ground like stone images of Jizo, dispersed in all

on the banks of the river, lying one on top of another, a group that had crawled to

also gradually transformed into corpses beneath the sun's scorching rays

the place where mother and younger brother were pinned under alive

also was engulfed in flames

who had fled and were lying

on the floor of the armory, in excrement

their bellies swollen, one eye crushed, half their bodies raw flesh with skin ripped

off, hairless, impossible to tell who was who

all had stopped moving

in a stagnant, offensive smell

the only sound the wings of flies buzzing around metal basins

can we forget that silence?

that tore apart our hearts

can it be forgotten?!

--TŌGE Sankichi, translated by Karen Thornber (from Poems of the Atomic Bomb, 1951)

On August 6, 1945 at 8:15am the Enola Gay, an American B-29 bomber, dropped the world's first atomic bomb on Hiroshima, Japan, killing 80,000 people, including many doctors and nurses, and injuring another 35,000. Following the Potsdam Conference in Germany (July 17-August 2, 1945), when Soviet leader Joseph Stalin, British Prime Minister Winston Churchill, and U.S President Harry Truman met, the fatal decision to bomb Hiroshima warded off Japan's demand for unconditional surrender -- effectively ending the Second World War. This major catastrophe caused an additional 60,000 deaths that resulted from the fall out of atomic matter. It was described by Colonel Paul Tibbetts, lead pilot of the Enola Gay, as a "giant purple mushroom" that turned Hiroshima into an "ugly smudge" and created "an awful blanket of smoke and fire." 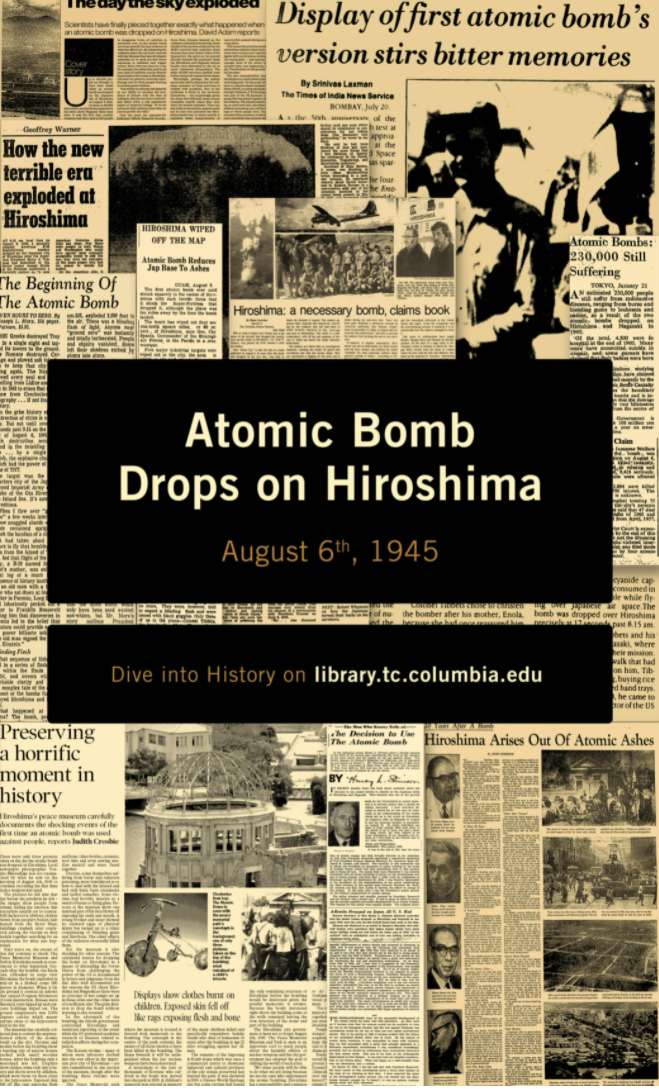