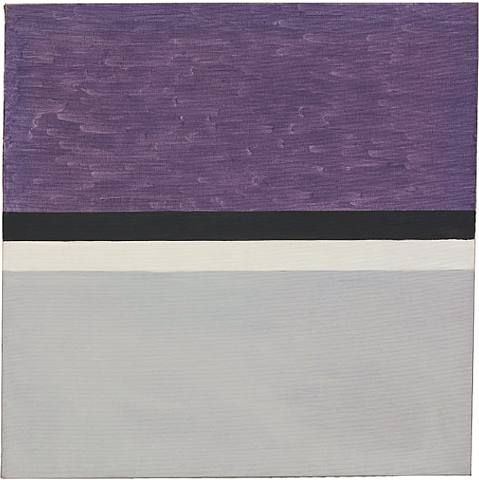 Considering herself an abstract expressionist, but called a "minimalist" by many, legendary Agnes Bernice Martin was born on March 22, 1912 in Macklin, Canada to Scottish Presbyterian farmers. She grew up in Vancouver, but emigrated to the United States in 1932 to care for her pregnant sister and also become an art teacher. Martin studied at Western Washington University College of Education, before attending Teachers College, Columbia University, where she took many classes in studio art.

Living in Coenties Slip in lower Manhattan, she associated with a thriving community of young, predominantly gay artists -- among them, Lenore Tawney, Jasper Johns, Robert Rauschenberg, Robert Indiana, and Ellsworth Kelly. Martin began exhibiting her work in the late 1950s. In 1967 she left New York after the death of her friend, Ad Reinhardt, also an abstract painter, and headed to Tao, New Mexico, where she drew inspiration from the teachings of Zen Buddhists and American Transcendentalists, as she continued to struggle with mental illness (paranoid schizophrenia), with which she was afflicted throughout her lifetime.

Agnes Martin was best known for her technique of priming canvases in acrylic gasso, then using a small ruler and masking tape to draw and paint horizontal lines. As she developed as an artist, her color schemes changed from gray, white, and brown, to brighter stripes of gray and blue, to the warmer, serene, or pale palettes of the arid desert where she eventually settled -- reclusively, living a frugal, if not spartan existence. Despite abandoning painting for long periods of time, Agnes Martin holds a significance place in twentieth century modern and contemporary American art through her prolific and influential abstract work.

In 1998 Martin was awarded a National Medal of Arts from the National Endowment for the Arts. On December 16, 2004, Agnes Martin passed away, and that same year she was elected to the Royal Canadian Academy of Arts. With re-surging interest, a major exhibition of Agnes Martin' work launched in 2016 at the Guggenheim Museum in New York City, following the Tate exhibition in London; a substantial amount of new scholarship on Agnes Martin continues to emerge and shed light on her life, art and legacy.