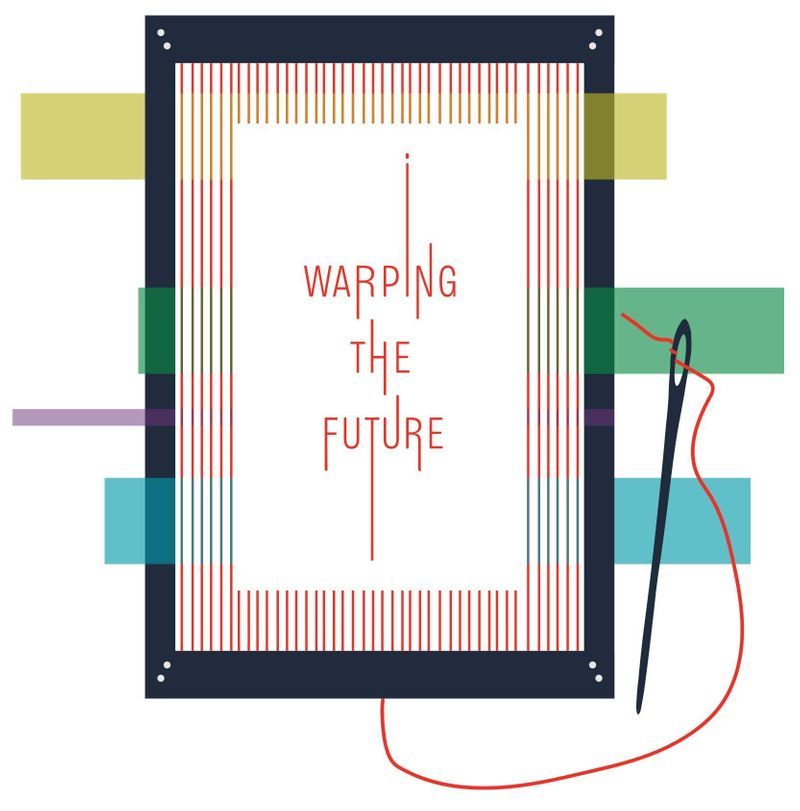 In helping judge the Gottesman Libraries' 2020 Commissioned Art, I suspect an interesting piece of research lays ahead, supportive of the work of artists Francesca Rodriguez Sawaya and Renata Gaui who propose an exhibition on the close histories of weaving and coding, with a special focus on the contributions of women. Women were central to the early mission of Teachers College, which grew out of the Kitchen Garden Association that taught cooking, sewing, hygiene, and other ""practical" or "domestic arts" to poor, often immigrant women. The Kitchen Garden Association evolved into the Industrial Education Association, also founded by Grace Hoadley Dodge, pioneering educator and philanthropist who organized a society for working women. In addition to forming the country's Young Women's Christian Association, Dodge created the New York Traveler's Aid Society to safeguard the rights and well-being of both migrants and immigrant women. With the fabric of institutional history comes the significance of curriculum that expanded understanding of social and historical context.

In 1917, "College News and Departmental Notes: A New Course in the Teaching of Occupations and Occupation Therapy", a new course is referenced in weaving and dyeing. It is described as being given by Miss de Neergaard, of the Institute of Crafts and Industry, Waterbury, Connecticut, who was trained in Sweden and had a long and successful experience in occupation therapy, both in private and institutional work (Teachers College Record, Volume 18, Number 3, 1917, p. 296-296). Recommended by Mrs. John Dewey and others, Elna de Neergard brought experience in teaching tooled leather, wood-carving, basketry, metal work, weaving, and tapestry weaving, and her materials were exhibited in various galleries, including the Art Alliance in New York City. (De Neergaard, Elna M., 1914, 1917, Occupational . Therapy )

Looking a few years earlier, we see weaving integrated into social studies classes at the experimental and demonstration schools of Teachers College, notably the Speyer School, which under Leta Holllingworth's leadership, mixed children of differing abilities or intelligent quotients, and made "emotional education" a significant part of the curriculum. When studying the Indians of Manhattan Island, the children in 1915 wove a rug upon a large loom similar to those used by Native Americans. Similarly in a unit on the Industrial Revolution, the children read about improvements in spinning and weaving. (See "Curricula In History" by Laura A. Gilmore. (Teachers College Record, Volume 16, Number 4, 1915, p. 350-350). In sewing "fifth graders made patterns, visited factories, discussed working conditions, tested fabrics, made tools to derive fibers made by the previous class, learned about linseed oil, and used it, and reportedly learned new mathematics in comparing yields, income, and by-product values." (Wygant, Foster. A History of the Department of Fine and Industrial Arts of Teachers College (New York: Teachers College, Columbia University, 1959, p.221) 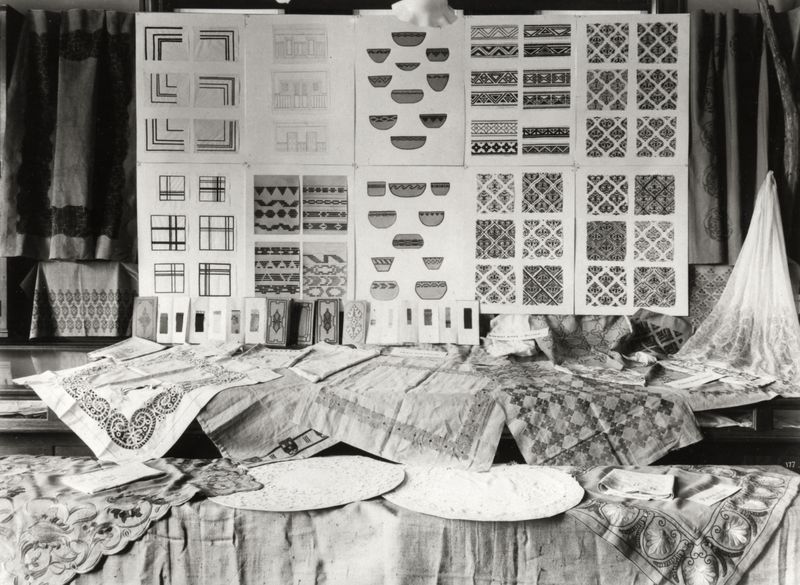 Arthur Wesley Dow, leading American art educator in the Arts and Crafts movement, and Professor of Fine Arts at Teachers College from 1904-1922, drew from teaching and learning at experimental elementary schools, among them the Dewey Lab School which opened in 1896 at the University of Chicago as a progressive approach to education; "activities like sewing and weaving introduced children to their social heritage and initiated more thoughtful inquiry" (Encyclopedia of Educational Theory and Philosophy, New York: Sage, 2014, p.225)

Dow substantiates the "fine art" of weaving and its large place in occupational therapy, especially as "bedside work". In 1919, "Art Service In War and Peace", he writes, "On its mechanical side it is curative both to mind and body, some forms of it being used by patients recovering from pneumonia. But weaving is one of the world's oldest and most precious arts. To practice it with no regard to design, texture, or color is to abuse it and waste good material. Basketry is but another form of the same art, having so great therapeutic value that it has been placed along with weaving among the occupations required in government hospitals." (Teachers College Record, Volume 20, Number 4, 1919, p. 353-353)

Stating handcrafts as "an important part in defense activities" of the Second World War, John K .Norton in "Fine and Industrial Arts" cites an influx of students enrolled in courses in bookbinding, reed work, block printing, woodwork, leather work, metal work, pottery, and weaving. As part of its work in national defense, the Department of Fine and Industrial Arts at Teachers College collaborated with Columbia University in a program of Occupational Therapy. (Teachers College Record, Volume 43, Number 1, 1941, p. 86-86)

In Foster Wygant's dissertation, A History of the Department of Fine and Industrial Arts of Teachers College, we find artist-educators who taught weaving at Teachers College, among them: Lili Blumenau of the Berlin Academy of Fine Arts and the Académie Scandinave in Paris, who was the first woman to graduate from the New York School of Textile Technology and taught here from 1948 to 1967; Signe Ortiz, a prominent artist from the Midwest who taught at Teachers College from 1947 to 1948, and whose longest tenure was at the University of Eau Claire, Wisconsin; and Jack Arends, who taught weaving briefly in 1952 before going on to head Northern IIlinois University's Art Department.

Special collections at the Gottesman Libraries include the McNeeley Costume Drawings Collection, a significant record of the educational work carried on at Teachers College during the 1920's. These drawings, which were created by Mary Elizabeth McNeeley as part of a student project in a class at Teachers College, are both visually appealing and evocative of an earlier period of art education. In addition the library's special collections include publications about textiles, weaving, sewing, and needlework from the seventeenth century through the late nineteenth -- starting with Gervase Markam's The English House-Wife: Containing the Inward and Outward Vertues Which Ought To Be In a Compleat Woman (London, Printed by Nicholas Okes for J. Harison, 1631), which advises on the ordering of wool, hemp, flax; making cloth; and dying. Included in our holdings are classroom primers, as well as books by Mary Schenck Woolman, founder of the Manhattan Trade School for Girls, who taught sewing at Teachers College.

There are fine threads interwoven with our history, illuminating the craft of training teachers, as well as teaching children. With congratulations to our commissioned artists, Francesca and Renata, they are weavers of an educational story that impacts our history and celebrates a new augmented reality, Warping the Future: How Craft Led to the Digital World As We Know It, a new virtual exhibition informed by the eponymous book display. 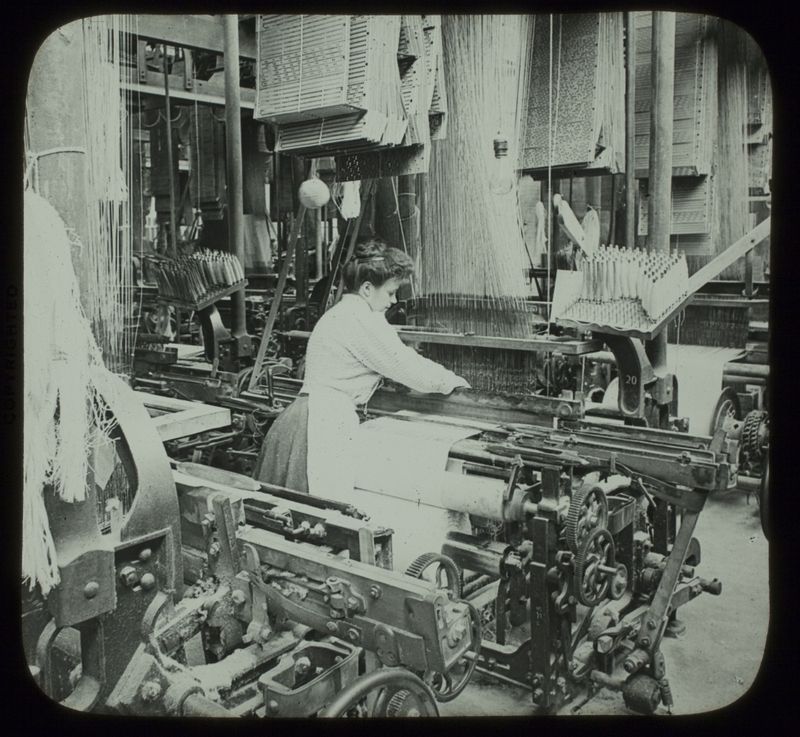 Curated by artists Francesca Rodriguez Sawaya and Renata de Carvalho Gaui in collaboration with library staff, Warping the Future, is part of their interactive exhibition that explores the connection between the history of crafting and the history of computing. It displays books that fit within the themes of:

These books are primarily by women writers and artists and include a variety of formats such as historical, autobiography and conceptual pieces. Works are available for research and inspiration, some onsite, and most of them online at the Gottesman Libraries, Teachers College, Columbia University.