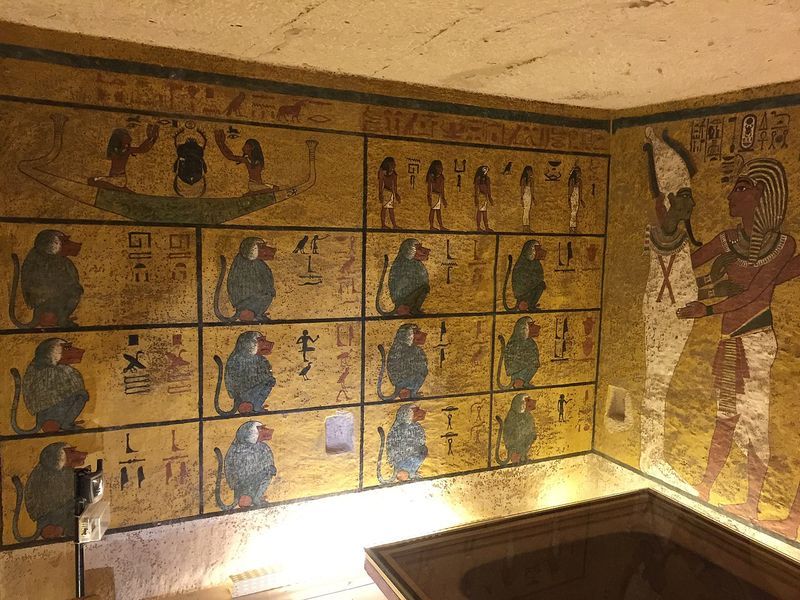 Convinced that there was at least one undiscovered tomb of a little-known Egyptian king who died at the age of eighteen or nineteen, the English archaeologist Howard Carter travelled with sponsorship by Lord Carnarvon to Egypt in 1891 to search for clues. Thanks to an Egyptian boy who stumbled on an nearby stone, Carter and his workmen discovered a step leading to the tomb of Tutankhamun, or King Tut, the 18th Dynasty Pharaoh who left behind a treasure that included statues, gold jewelry, a chariot, model boats, jars, chairs, paintings, and a golden mask. On February 16th, 1923, after months of excavation, they entered the last door of the sealed burial chamber; inside lay three coffins, the last of which was made of gold and contained the mummified body of King Tut. The best preserved pharaonic tomb in the Valley of Kings, Tut's chamber had remained intact for over 3,000 years, unlike many others that had been robbed over time of their riches. The discovery prompted unprecedented response and interest in international exhibition, allowing the world to learn more about ancient civilization and the young Pharaoh who, along with Carter, would become famous throughout the world.