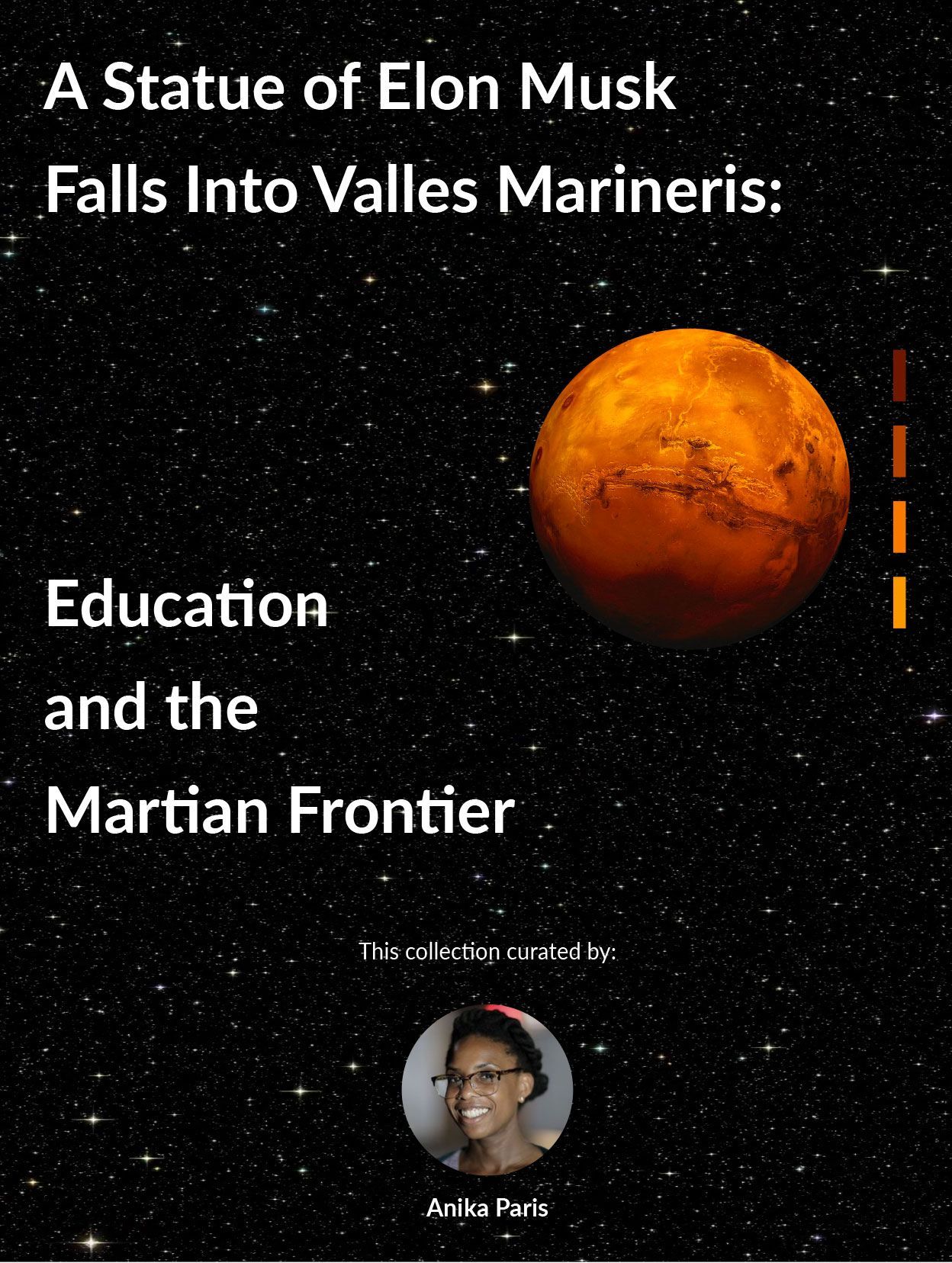 From the summer of 2017 to spring, 2018, the Gottesman Libraries Education Program staged Mars Mission , an out-of-this-world immersive experience in the Smith Learning Theater. The 70 minute production simulated a mission to the Red Planet during which participants, divided into teams, worked together to solve problems of human settlement on Mars, from the scientific to the technical. While the idea of travel to (and visits from) Mars has long been a staple of fantasy and science fiction, recent developments have brought that prospect closer to reality. Mars One, a Dutch nonprofit, made international news in 2013 when over 200,000 people submitted applications for 100 places on a one-way trip to the planet. NASA's Moon to Mars initiative aims to send at least one man and one woman to the Moon by 2024 in order to [establish] sustainable exploration for settlement on Mars. Among the private enterprises collaborating with NASA on that initiative is SpaceX , the company founded by tech entrepreneur Elon Musk with the mission of enabling the colonization of Mars. Like Gottesman Libraries Mars Mission, media coverage of the prospective colonization of Mars has considered the issue as largely a set of scientific, technological, and funding problems. But histories of colonization on our home planet point to deeper questions about the philosophy and moral implications of colonization itself. This collection looks at literature about Mars alongside literature about colonial education to more fully consider the possibilities of human settlement on Mars. 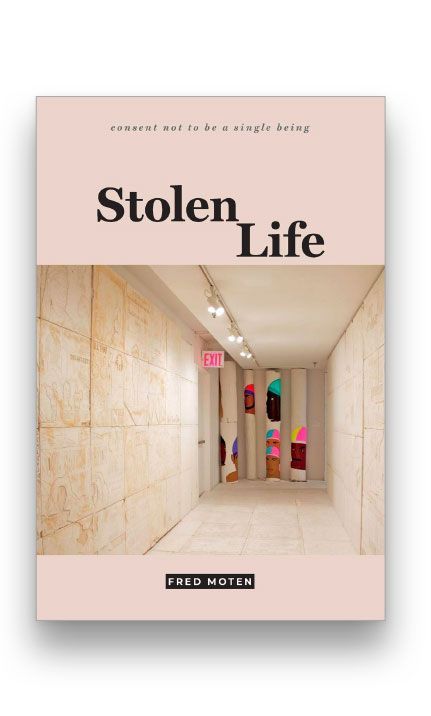 Building on what Luce Irigaray calls the fecundity of the caress, Moten's essays explore the possibilities of encounter without domination. As he says in the preface, [t]oo often life is taken by, and accepts, the invasive, expansive aggression of the settler, venturing into the outside that he fears, in search of the very idea as it recedes from its own enabling condition, as its forms are reclaimed by the informality that precedes them[...] the informal is understood as formlessness, the structured, structuring force that settlers, running diabolical errands, take for wilderness. 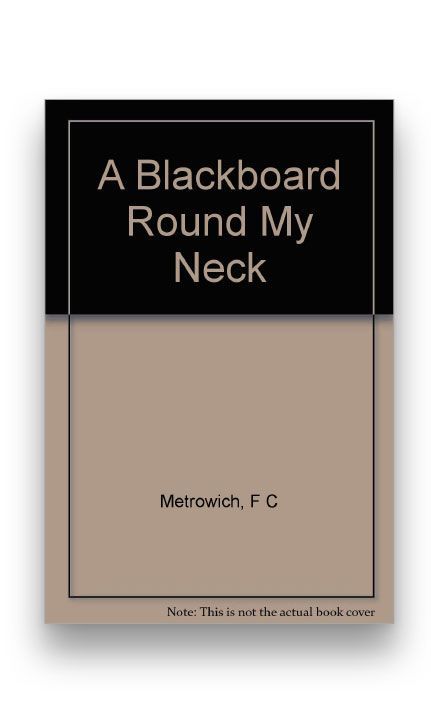 A Blackboard Round My Neck

A jolly memoir of a South African teacher. 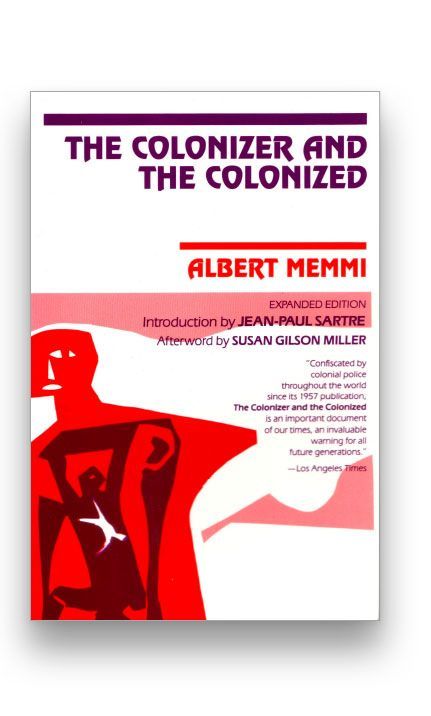 Colonizer and The Colonized

Albert Memmi, who died in May at the age of 99, was a French-Tunisian Jewish educator and writer. Published in the wake of Tunisia's independence from France, and while many liberation movements were underway throughout Africa and other parts of the colonized world, The Colonizer and the Colonized portrays archetypes and modes of thought among those named in the title. Probably most relevant to the current designs on Mars is the first chapter, Portrait of the Colonizer. 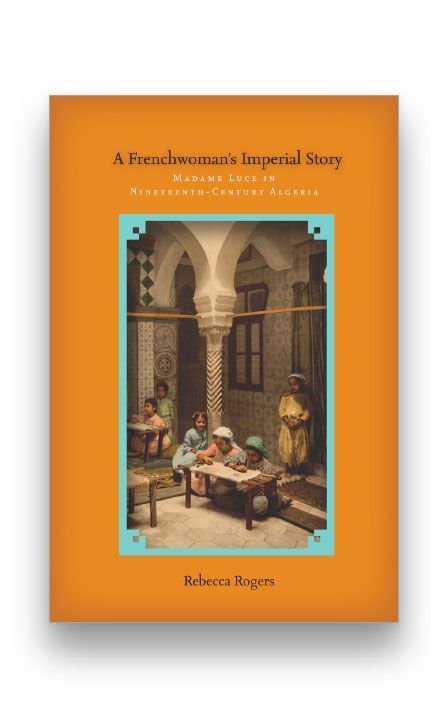 In 1832, schoolteacher Eugénie Allix Luce left her daughter, husband, and homeland of France for the newly colonized land of Algeria. Thirteen years later, impassioned by a belief that girlseducation was a unique means to have our morals, our habits and our beliefs penetrate within families, she founded the first school for Muslim girls. Yet by 1860, colonial administrators shut the school down, arguing that [b]y raising them as Europeans, we have sullied them for Arab life. The story of Madame Luce can help us think through some of the power struggles and appeals to gender parity within the contemporary colonizing moment, such as NASA's plans to send one man and the first woman to the moon in 2024, and the similarly gender ratioed Mars 100. 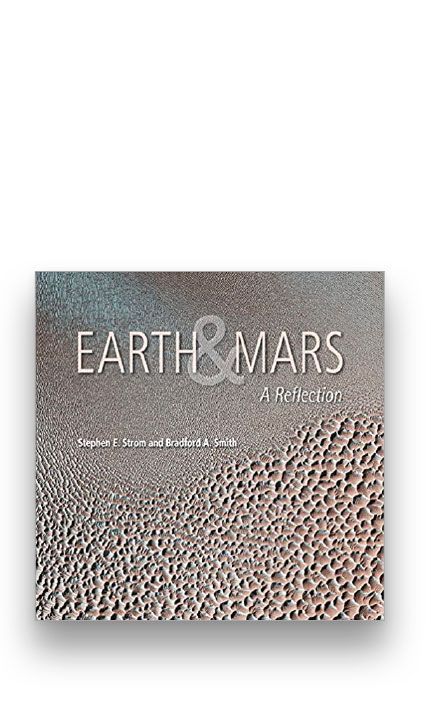 Earth and Mars: A Reflection

by Stephen E. Strom and Bradford A. Smith

The authors, both noted astronomers and photographers, pair landscape photos of Earth and Mars, separated into chapters on Earth, Fire, Air,and Water,with texts comparing the planets natural histories. The two often refer to Mars as a deficient version of earth, or a potential proto-Earth; as Strom puts it, as the planets evolved, one oursremained rich with water, the source and origin of life as we know it, while the less fortunate Mars lost nearly all of its surface water. [Earth] ends with images that evoke the epoch when life began on Earth, while on Mars any primitive life-forms would find evolution toward greater complexity challenging if not impossible. 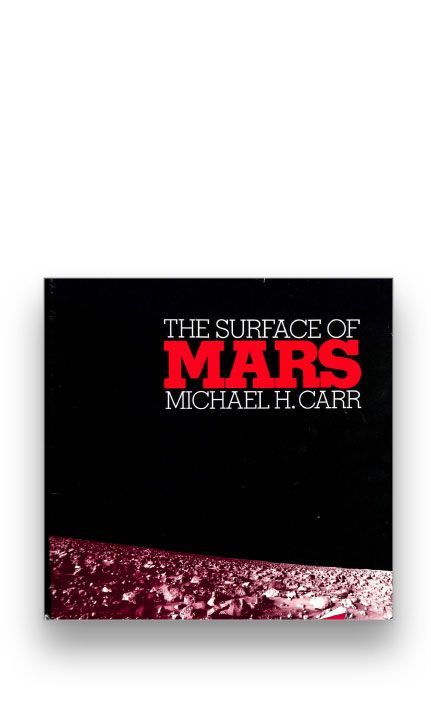 The Surface of Mars

At the time of its publication, this book summarized the findings from the full history of Martian exploration, from the 1964 Mariner 4 to the 2005-2006 Reconnaissance Orbiter. While earlier speculations about life on the planet are dismissed as absurdin the preface, Carr concedes that the possibility that Mars may at one time have hosted some form of life remains the strongest scientific driver of the Mars Exploration program. 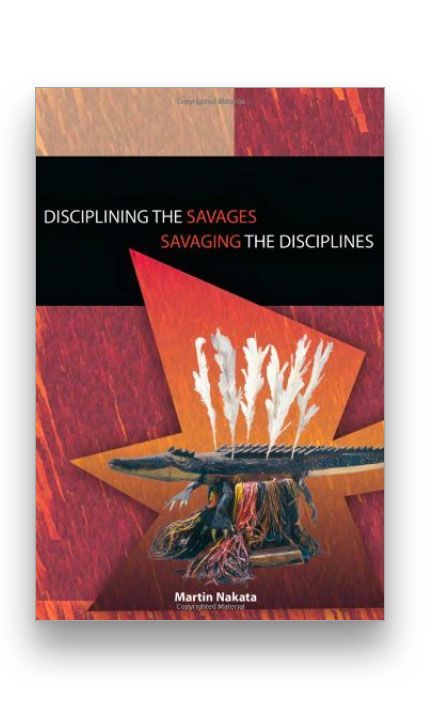 Disciplining the Savages: Savaging the Disciplines

As a native, unqualified Education Officer on the Torres Strait, Nakata often felt that his local knowledge was ignored, discounted, or relegated to limited contexts relative to his formal education. Nakata's pursuit of an education degree failed to remedy the situation, leading him to interrogate how some ways of knowing are privileged over others. As he puts it, I wanted to investigate the way these two realitieshave met historically at the interface of Islander experience and Western knowledge systems. I wanted to come to an understanding of how this had come about. And I wanted, through this knowledge, to change this situation. 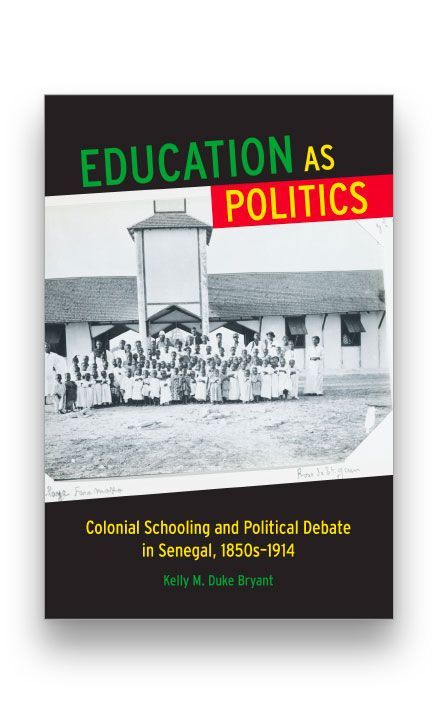 Following nearly two centuries of occupation along the coast, French colonial expansion into Senegal's mainland began in earnest in the mid-19th Century. The expansion of French control and bureaucracy was closely tied to the development of the colonial education system, which opened new areas of political participation for the Senegalese people even as it was designed to inculcate a deference to France in them. It is against this backdrop that Bryant sets the historic 1914 election of Blaise Diagne, the first Black man to serve as Senegal's deputy to the French National Assembly; effectively arguing that education served as both a path to and target of political power. 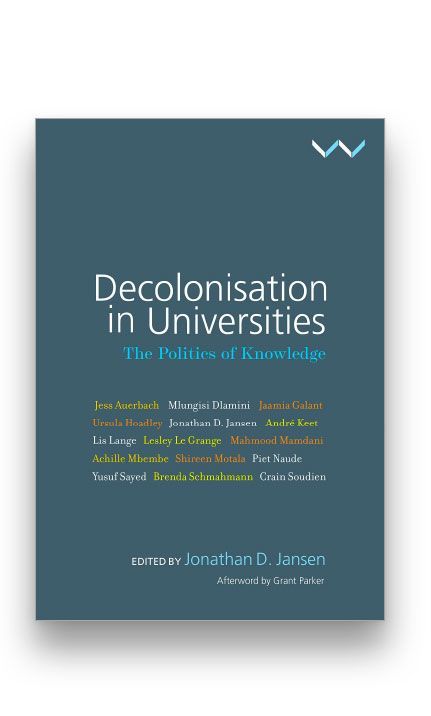 Decolonization in Universities: The Politics of Knowledge

The 2015 hashtag #RhodesMustFall led to the removal of the University of Cape Town's giant Cecil Rhodes statue, and spawned the Fallism movement and its attendant calls to decolonise universities across South Africa and around the world. Decolonisation in Universities features the work of the best curriculum minds in South Africa to discuss the theoretical underpinnings of decolonisation, as well as its possibilities and implications within the contexts of other African countries including Uganda, Tanzania, and Mauritius. 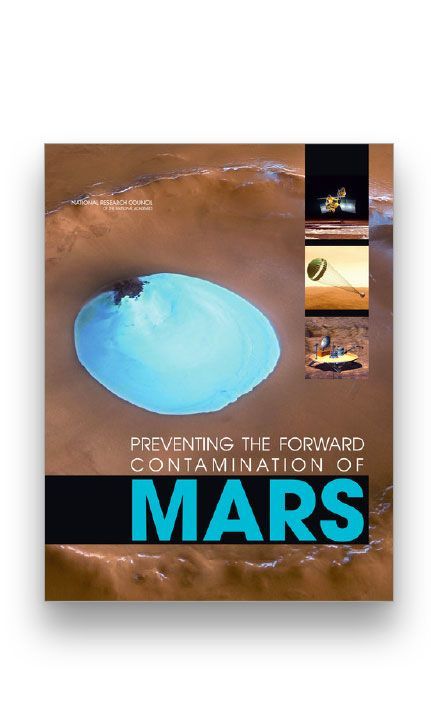 Preventing the Forward Contamination of Mars

by National Research Council, Division on Engineering and Physical Sciences, Space Studies Board, Committee on Preventing the Forward Contamination of Mars, and National Academy of Sciences

SpaceX has been the repeated subject of public scrutiny and repeated criticism for failing to adhere to the strict cleaning and manufacture requirements that had been standard in publicly-funded space exploration. Some of those requirements and other considerations are outlined in this report, which relies largely on data collected during the 1976 Viking and 1996 Mars Pathfinder missions, prior to NASA's collaborations with private enterprise. 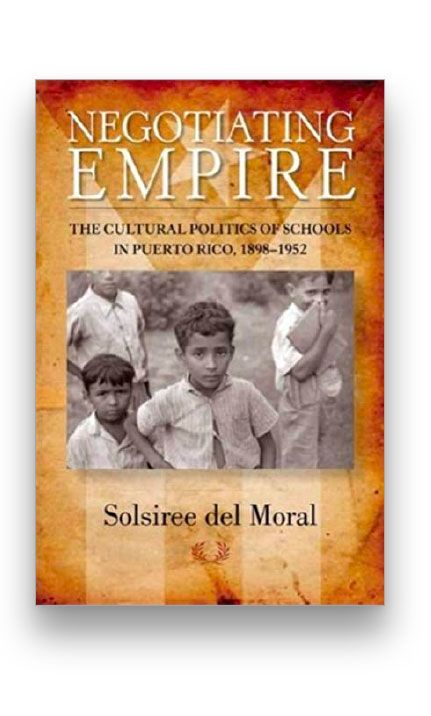 Negotiating Empire : The Cultural Politics of Schools in Puerto Rico, 1898-1952

The U.S. invaded Puerto Rico in 1898, going on to occupy the island for two years before declaring it an unincorporated territory. People born in Puerto Rico have been granted U.S. citizenship since 1917, but del Moral demonstrates how citizenship has always been a fluid, animating idea for the colonial project, and one that has largely been negotiated within the educational system. While there is no life yet recognized on Mars, this book begs the question of how the planet's colonization could impact visions of nation, citizenship, and empire here in the U.S. and more broadly, on Earth. 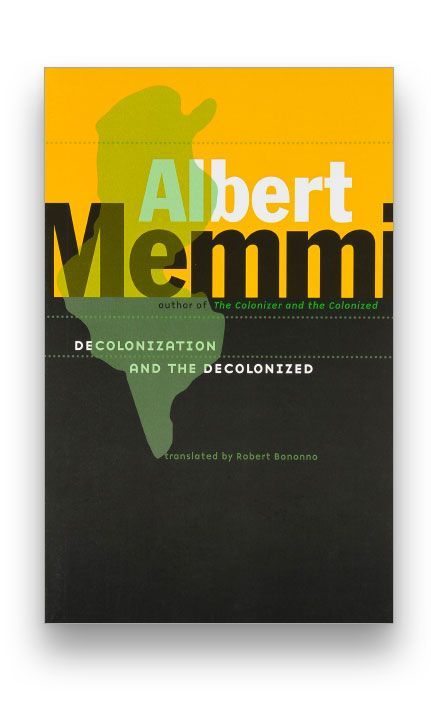 Decolonization and the Decolonized

Here, Memmi returns to the people and ideas discussed in his 1965 book, The colonizer and the colonized to reflect on the outcomes of the decolonization struggles of the 60s and 70s. Focusing on the formerly colonized- the citizens and emigrants of newly independent nations, he's less than sanguine: I concluded The Colonizer and the Colonized with the words Having reconquered all his dimensions, the former colonized will have become a man like any other, but I also added with all the ups and downs of all men to be sure. Clearly, the downside continues to play a preponderant role. 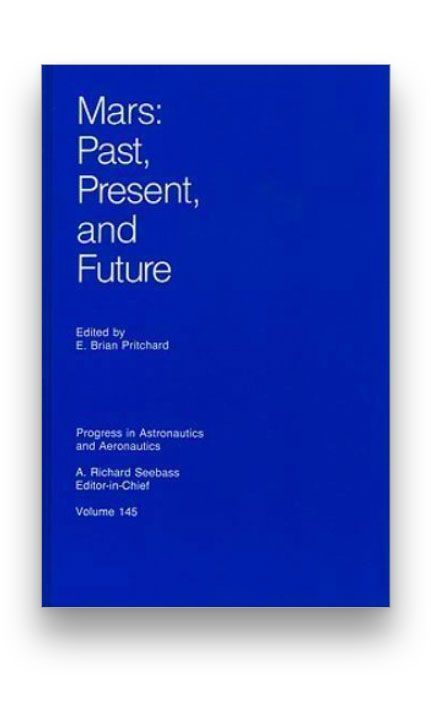 by E. B. Pritchard

The Mars Exploration Past, Present, and Future Conference convened in July, 1991, two years after President George Bush announced a Space Exploration Initiative on the 20th anniversary of the Apollo 11 lunar landing, and coinciding with the 15th anniversary of the first Viking landing on Mars. Among the papers presented there and compiled in this volume is Reginald Newell's Mars Mission Benefits: A Layman's Perspective, in which he explains what the general public could expect from the exploration of Mars: Sooner or later, we will be journeying into space routinely to mine and process minerals, to collect and distribute power, to conduct research and experiments, and, increasingly, to colonize- to establish permanent settlements.