In the 1920s, Black artists, musicians, dancers, writers, and thinkers had settled into Harlem after the Great Migration and built a community where they could congregate and create. While Harlem is considered the epicenter of this prolific movement, other cities around the country saw their own related scenes spring from the ground up, and the innovations of those involved impacted the whole world.

Teaching the Harlem Renaissance is a collection of resources that span age ranges from pre K-12 and beyond. The spirit of change, the fight towards equity championed by people across fields of expertise, and the closeness of it all to our city’s history is crucial for our classrooms. The NYC DOE reports that 25.5% of all students in the city’s public schools are Black. However, according to the Cooperative Children’s Book Center, 50% of protagonists in all children’s books published in 2018 were white. Connecting learners of all ages to stories of compelling Black leaders can help kids (and adults, too) see themselves and their peers in a more positive light. We owe it to our students to contextualize this legacy of changemaking and encourage them to find their place in it. The Harlem Renaissance centered around bringing Black American identities to the forefront of the collective consciousness. This can - and must - still be honored today, 100 years later.

This collection contains primary sources, biographies, historical fiction, and collections of essays, poetry, and visual art. While many are physical materials, ebooks and other digital sources are also represented. The link at the start of the previous paragraph gives a more in-depth look at digital resources and is designed by Trisha Barton. 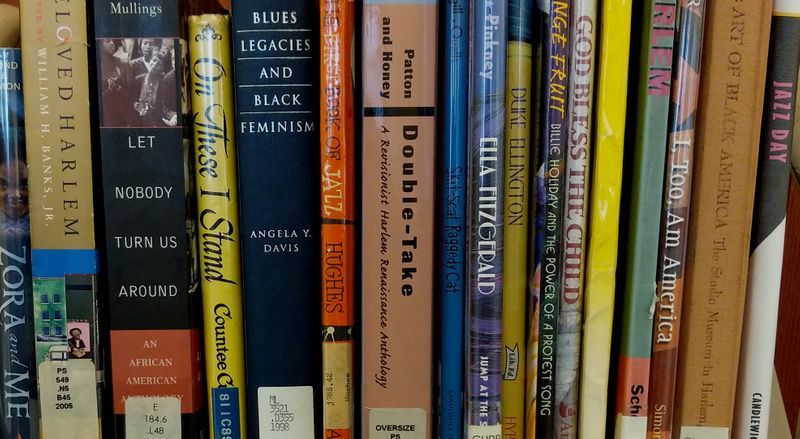 Image: colorful spines of print books in this collection, shot by Rachel Altvater

Beloved Harlem: A Literary Tribute to Black America's Most Famous Neighborhood: From the Classic to Contemporary edited by William H. Banks, Jr.

"This book is dedicated to literary giants such as Clarke, Hughes, Baldwin, Hurston, and Killens who have gone before us, but who have left us the broad shoulders of their work to stand upon. They were each first drawn to the sanctuary of Harlem. And once there, they fell in love with it and with the art of putting the African-American experience into words. It then became their beloved Harlem and ours" (p. xvii).

"Beyond the realm of musical culture, many feminists of color are rethinking mainstream feminist historiographies, not simply to carve out a place for women of color, but rather to contrast the very validity of the discourses employed in those works" (p. xix).

This text explores the ways that virtual reality can allow students to access historical sites like Harlem, Bronzeville, and Montmarte, transcending boundaries of both space and time.

"By bringing [...] frequently omitted texts into dialogue with the more familiar nucleus of Harlem Renaissance writings, we hope to encourage not only a more gender-balanced view of this remarkable literary awakening, but to emphasize its continual unfolding" (p. xxxix).

Duke Ellington: The Piano Prince and His Orchestra by Andrea Davis Pinkney, illustrated by Brian Pinkney

The Pinkneys’ jazz-infused storytelling and art styles bring Duke from the bench where he first learned piano to the forefront of the music scene.

Ella Fitzgerald: The Tale of a Vocal Virtuosa by Angela Davis Pinkney with Scat Cat Monroe, illustrated by Brian Pinkney

This free-wheeling prose journey -- narrated by a cat! -- begins with Fitzgerald making her way to the Apollo at just seventeen.

The First Book of Jazz by Langston Hughes, illustrated by Cliff Roberts

"Jazz is a way of playing music even more than it is a composed music. Almost any music can become jazz if it is played with jazz treatment" (p. 45).

A warm and joyously illustrated rendition of Holiday's famous performance of "God Bless the Child," complete with a CD for reading and singing along.

A vivid verse-and-collage homage to how a little neighborhood came to be Harlem.

"The Harlem Renaissance [...] left a rich cultural legacy. The exhibition Harlem Renaissance: Art of Black America explores the visual aspects of that legacy, taking a comprehensive look at the compelling images of the era through a hundred and fifty works of a small, yet representative group of painters, sculptors, and photographers."

This Jackdaw folder, brimming with primary sources, guides for curious young researchers, and other teaching materials is a great fit for a social studies classroom.

I, Too, Am America by Langston Hughes, illustrated by Bryan Collier

This Coretta Scott King award-winning rendition of Hughes' compelling poem takes readers on a journey through time with Caldecott honor Collier's collages of Black perseverance and triumph throughout American history.

Jazz Day: The Making of a Famous Photograph by Roxane Orgill, illustrated by Francis Vallejo

Poems in this book capture the voices of people involved in Art Kane's famous photograph, Harlem, 1958, and the atmosphere surrounding the shoot. Readers may recognize names of musical heavy-hitters, or they may only find a familiar-looking stoop and friendly faces in the stylized illustrations, but they will come away with a more well-rounded perspective on the history of jazz and of Harlem overall.

Let Nobody Turn Us Around: Voices of Resistance, Reform, and Renewal: An African American Anthology edited by Manning Marable and Leith Mullings

2009 edition also available as an ebook

"Democracy is going to wreck itself if it continues to approach closer and closer to fascist methods in its dealings with Negro citizens—for such methods of oppression spread, affecting other whites, Jews, the foreign born, labor, Mexicans, Catholics, citizens of Oriental ancestry—and, in due time, they boomerang right back at the oppressor” (p. 286). From “My America” by Langston Hughes.

“And somehow it was borne upon my brain

How being dark, and living through the pain

From “The Shroud of Color”

The Power of Pride: Stylemakers and Rulebreakers of the Harlem Renaissance by Carole Marks and Diana Edkins

"The Power of Pride features seventeen (sixteen black and one white) of the most prominent men and women of the New Negro Renaissance, artist-migrants who hungered to 'arouse the troubling suspicion.' Alternately irreverent, racy, and painfully honest, they were unique: risk-takers in dangerous times, sophisticated salonières in an age of bourgeois provincialism, and experimenters who briefly managed to transcend race by immersing themselves in it" (p. 10).

Interspersed with lyrics and onomatopoeia, this rollicking biography follows Ella's every step to stardom.

Strange Fruit: Billie Holiday and the Power of a Protest Song by Gary Golio, illustrated by Charlotte Riley-Webb

A captivating book that speaks frankly about the struggles that Billie Holiday faced in simple yet striking language. Facts are presented with rich, dynamic paintings, setting a dark, powerful tone and contextualizing an artist with her activism.

The Sweet and Sour Animal Book by Langston Hughes, illustrations by students of the Harlem School of the Arts, introduction by Ben Vereen, afterword by George P. Cunningham

Previously unpublished, these short and alphabetical animal poems are one of Hughes' hidden treasures for young readers. The photos of animal sculptures created by students at the Harlem School of the Arts add to the playfulness of the poems (and they make for great project ideas!).

Zora and Me by Victoria Bond

Coretta Scott King/John Steptoe Award for New Talent winners Bond and Simon transport readers to Zora Neale Hurston's childhood...embellished with a healthy dose of YA murder-mystery. The authors use historical fiction to explore the coming-of-age of a prolific storyteller and leading voice in the Harlem Renaissance.

After Winter: The Art and Life of Sterling A. Brown edited by John Edgar Tidwell and Steven C. Tracy

Dorothy West's Paradise: A Biography of Class and Color by Cherene Sherrard-Johnson

Duke Ellington: His Life in Jazz with 21 Activities by Stephanie Stein Crease

The Harlem Reader: A Celebration of New York's Most Famous Neighborhood, from the

The History of Jazz by Ted Giola

In Search of Nella Larsen: A Biography of the Color Line by George Hutchinson

The Sage of Sugar Hill: George S. Schuyler and the Harlem Renaissance by Jeffrey Ferguson and Judith E. Jacobsen

Google Arts and Culture offers a few ways to interact with artwork from the Harlem Renaissance, from a topic page on the movement itself to a variety of online collections, stories, user-created galleries, and individually cataloged pieces.

Playlists like this Harlem Renaissance list can provide an introduction to the talents at the forefront of music in the movement. Some, like this Harlem Renaissance Jazz list, weave musical tapestries that connect the New York scene to larger American music trends. Platforms like Spotify and Apple Music allow anyone to make their own mixes to share.

The Lost History of the Harlem Renaissance, presented on NPR’s program 1A, guests William Maxwell, Morgan Jerkins, and Autumn Womack explore popular and never-before-seen written works and their cultural contexts. The voices of Harlem Renaissance authors reading their own works are also heard in this broadcast.

15 Minute History Episode 49: The Harlem Renaissance is part of a series produced by University of Texas at Austin. This episode features guest Frank A. Guridy, a history professor at Columbia, and nods towards many of the historical figures and texts featured in this collection.

History of Color ep. 07 - Harlem Renaissance is a monthly podcast focusing on underrepresented people and events in history. Host Allegra Alvarado and her guest focus on “us telling our story in our way,” and the vibrant scenes across the country where Black creators were able to do so in the 1920s.