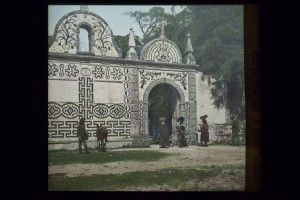 After much investigation, we finally discovered a current picture of this exact spot in a Portuguese blog!

The structure is one of the main entrances to a 100+ hectare forest in the Bussaco region in Portugal. It is called the Coimbra Gate (Portas de Coimbra), and is part of a wall over 3 miles in circumference encircling the arboretum.

The area used to be the site of a Barefoot Carmelite convent in the 16th century. The monks at the convent were responsible for creating this beautiful forest with its unusually diverse species of trees. This was done less out of vanity and more as their representation of the Earthly Paradise. The forest grew so well that even after the state later took ownership of the land, new plant species continued to be brought in from overseas and added to the area. The region now boasts well over 400 varieties of trees and shrubs from across the globe including from countries like Japan, Mexico and Lebanon. Today, parts of the original convent and church are preserved near the Bussaco Palace Hotel which resides within the Forest as well. The Bussaco Palace Hotel was built at the turn of the 19th century. It is placed inside the Bussaco Forest on a hill, affording gorgeous views and looks straight out of a fairytale. It houses beautiful artwork, antiques, rooms and service worthy of royalty, and most interestingly, its very own brand of wine. This tradition of wine making in Bussaco was started by a Carmelite monk in the 17th century. Unsurprisingly, the hotel attracts celebrities, politicians and royalty. Some of the famous personalities that are rumoured to have stayed here include Agatha Christie, Sir Alec Guinness and Raymond Burr. Fun Fact - The Duke of Wellington defeated Napoleon’s troops at the Battle of Bussaco and spent the night at this convent.

There are 2 papal bulls inscribed on tablets at the entrance to the woods. The first was from Pope Gregory XV in 1623 anathematizing trespassers and forbidding women to approach ('to avoid dangers and scandals'). The second bull was from Pope Urban VIII in 1643 threatening to excommunicate any person who harmed a tree in the forest (Portugal’s first ever documented natural conservation act). In addition to hosting a dazzling multitude of flora and the once-royal residence, the Bussaco Forest is known to appeal to hiking enthusiasts. There is a stone stairway through the forest designed with a stream flowing down the middle. Another famous trail is the Via Sacra, which was constructed to resemble the Via Dolorosa in Jerusalem.

Image: Stone staircase with a stream through the woods

Have we inspired your wanderlust? Visit PocketKnowledge for even more Portugal-related items! --- The Rothman Lantern Slide Collection is a K-12 teaching resource containing several thousand mounted photographic transparencies intended for projection by a magic lantern. These slides were used in New York City public schools in the mid-twentieth century.
Posted in: Learning at the Library, Archives|By: Paul Mathew|1412 Reads