The highest accolade that a piece of children's literature can receive is a chorus of voices shouting "Again! Again!" when the story is finished. Measuring what makes a book stick out to children isn't always easy, but awards panels try their best to strike a balance between books that are most likely to be read front and back, over and over, and books that are most likely to make a lasting impression for readers of all ages. This year, I have been given the honor of presenting the most recognized children's books of 2018. The materials on display come from long lines of winners and honorable mentions before them, many of which have gone on to become classroom staples and timeless classics. They represent awards and book lists that focus on excellence in literature and illustration spanning over genres and reading levels, with the intention of making reading and learning enjoyable for everyone. There is no greater joy than sharing these stories with you as a librarian and educator. 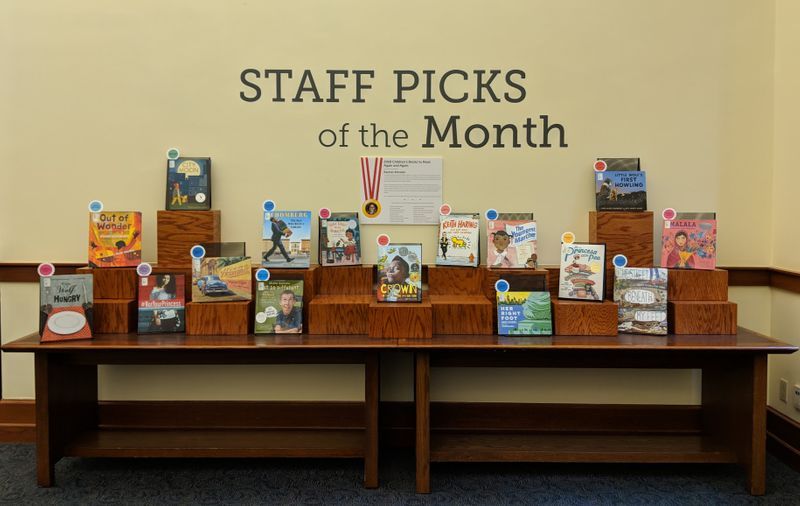 Books featured in our collection have been recognized by one or more of the following organizations. Information about the awards and book lists are available through the links included:

The Caldecott Medal is awarded to the artist of the most distinguished American picture book for children.

John Newbery Medal The Newbery medal is awarded to the author of the most distinguished American picture book for children.

The Coretta Scott King Book Award is presented to books that demonstrate an appreciation of African American culture and universal human values. One author and one illustrator also receive the Coretta Scott King - John Steptoe Award for New Talent, which affirms new talent and offers visibility to excellence in writing or illustration at the beginning of a career of a published book creator.

The Ezra Jack Keats Book Award is given annually to an outstanding new writer and new illustrator.

The Belpré Medal is presented annually to a Latino/Latina writer and illustrator whose work best portrays, affirms, and celebrates the Latino cultural experience in an outstanding work of literature for children and youth.

The Geisel Award is given annually to the author(s) and illustrator(s) of the most distinguished American book for beginning readers published in English in the United States during the preceding year.

The Schneider Family Book Award honors an author or illustrator for a book that embodies an artistic expression of a disability experience.

The Sibert Informational Book Medal is awarded to the authors and illustrators of the most distinguished informational book publishers in the United States, for books published in English.

The ALA Notable Children's Book List identifies the best of the best in children's books.