Rachel Altvater
Nov 21 2015 - 11:17 AM
Share
Virtual Reality at the Library
Every day, a physical copy of the New York Times is available to patrons at the Gottesman libraries. If you get the paper delivered to you, you may have been as excited as we were to find that something special had come along with the Saturday paper two weeks ago. This edition of the weekend paper came with a front page story about three children who are caught in the global refugee crisis, whose lives are detailed in print and in virtual reality video. The New York Times, in partnership with Google, shipped each weekend subscriber a cardboard virtual reality viewer. With a few simple folds and a quick download of the free NYT VR app, you are able to plunge into a new realm of digital storytelling. So, what happens behind the Library Services desk once our work is done? Well, when life gives you cutting-edge technology packaged in a highly accessible form, you try it. Once I downloaded the app, I was presented with a number of videos to download, including The Displaced, the video from the front page. I was given the option to view each video in a standard view on my phone, or in a mode compatible with the Google Cardboard viewer. The app encouraged me to put on headphones and secure my smartphone inside of the viewer after my video had downloaded. Lorraine and I decided to give it a spin. Literally. We found ourselves looking every direction we could in order to absorb each sight provided by the eleven-minute experience. I was astounded by the devastating wreckage of war as it appeared in front of me, under my feet, and on the horizon behind me. The three children felt closer than I imagined. In an age where consumers of information expect immediacy and immersion, this collaboration between Google and the New York Times is incredibly fitting. Together, they have pushed the boundaries of how media draws its consumers into a story. [caption id="attachment_22906" align="aligncenter" width="300"] 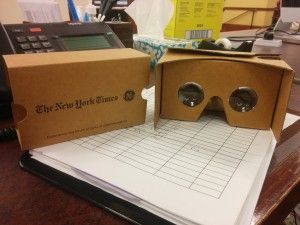 The Google Cardboard viewer - small, yet mighty.[/caption] Over the past two weeks, I've been focusing on what people have to say about their virtual reality experiences. The general reaction was that the images took a bit of getting used to - the 3D, 360 degree view was a little strenuous - but that using Google Cardboard was, overall, amazing. People across the world are excited to dive into the stories provided by the NYT VR app. A few of my colleagues here at EdLab even reported that they had been attempting to build their own Cardboard viewers based on the templates in the manufacturer kits offered by Google. These kits are free to download. Google has been clear about making this technology as widely accessible as possible since announced the idea for Cardboard earlier this year. By handing out fully made devices to New York Times subscribers and allowing people to make them on their own with only the cost of purchasing their own materials and spending time and effort on building, it is fully possible to spread the use of virtual reality viewing to a wide audience. But Google isn't the only one cashing in on the uptick in immersive video. YouTube already hosts videos with viewing angles that can be controlled by the viewers themselves through YouTube 360, and Facebook has been planning on rolling out a similar service since its acquisition of Oculus VR in 2014. While most of the devices that record 360 degree video still come with a hefty price tag, there are still camera apps which allow users to take full-circle pictures (or "photo spheres"). With this insurgence of technology for viewing and capturing virtual reality experiences, the big question is always "what's next?" The New York Times is bringing journalism to new heights, and Google is bringing us the means to experience it. Will libraries and schools provide virtual reality viewing stations, as they have provided text, audio, and video for learners?  I would not be surprised if they became commonplace. From building the viewer to experimenting with its uses and engaging with digital content, the whole experience is enriching and inspiring.
Posted in: Learning at the Library|By: Rachel Altvater|646 Reads