Jihii Jolly
Jan 13 2012 - 05:27 PM
Share
Writing Without Words
Stefanie Posavec is a London-based artist (originally from Colorado), who's created a number of fantastically original projects--many related to literature. Especially marvelous is her series, Writing Without Words, in which she visualizes differences in the writing styles of various modern classic authors. Interestingly, she does most of her work by hand. The Project A large portion of this project is dedicated to Jack Kerouac's On the Road. She visualizes Part One of the book in a piece called Literary Organism, using a tree structure that divides it hierarchically into parts--Part One into chapters, chapters into paragraphs, paragraphs into sentences, sentences into words. Sentences are color-coded according to eleven themes Posavec has identified in the book, including, for example, Travel, Character Sketches, or Work & Survival. In Sentence Drawings,  she visualizes sentence flow and length. Both pieces are explained in the book: Writing Without Words.

A second book, Rhythm Textures, examines rhythm and punctuation in three chapters of On the Road. Each word in a sentence is represented by a line, the thickness of and space between which represents pauses and emphases made by punctuation.

The comparative piece in this series is First Chapters, in which Posavec illustrates the differences in writing style between such authors as Steinbeck, Faulkner, Woolf, Salinger, Orwell, and Kesey. Similar to sentence drawings, each book's illustration is composed of line drawings based on the number of words per sentence in the first chapter. She explains, "The more tightly wound the drawing means a shorter, choppier flow of sentences was used, while a larger drawing represents a writing style that utilises long, flowing sentences."

A final piece in the series is a poster of 20 pages from Posavec's own copy of On the Road, showing her highlights and notes. 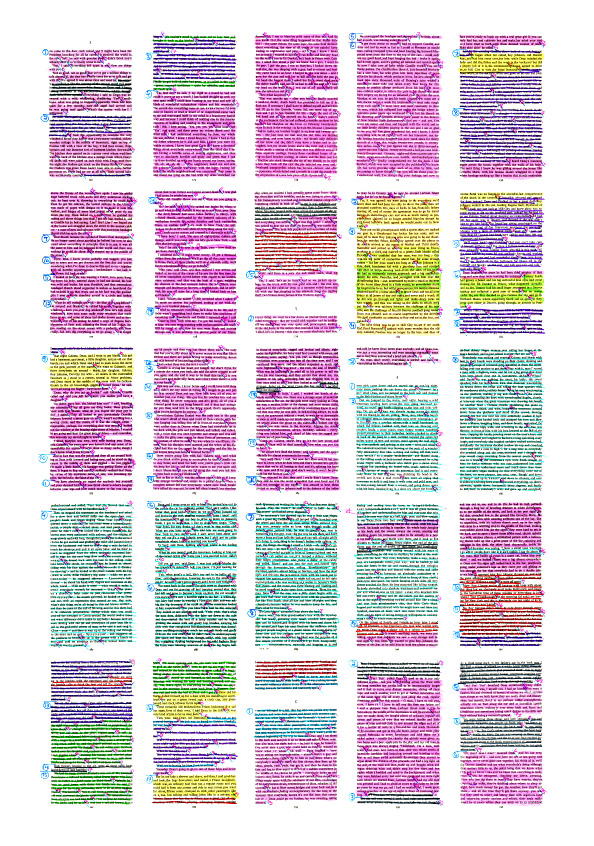 The Value Though the project is already a few years old, I chose to feature it here because of the unique educational potential it holds. I think it's worth considering in the context of learning and not only art, especially for high school Language Arts curriculum. When I was in high school, I recall a conversation with one of my high school English teachers about how I thought it might be helpful to be given something to read for, especially summer reading books. The response was always a list of discussion questions to prepare for class, but, sad to say, those lend themselves to Sparknotes and other reading shortcuts. When it really came time to study for an exam, the only effective way I found to study was to take meticulous notes and yes, I color-coded everything. Imagine a simpler visualization project something like Posavec's to motivate students to get into their readings in new ways (like to study grammar or sentence structure). At the end of it all, they'd still have to read the content and at the same time, a creative or visual project might inspire the student who isn't so interested in literature. Something to ponder. Of course, as art, Posavec's series is unquestionably stunning in more ways than one. See These Links! Writing Without Words received tremendous praise in reviews from Notcot and Brain Pickings, and her own commentary on the work can be read here. Also see this video from Flowing Data (embedded above too) in which Posavec discusses her own process of data design.
|By: Jihii Jolly|845 Reads