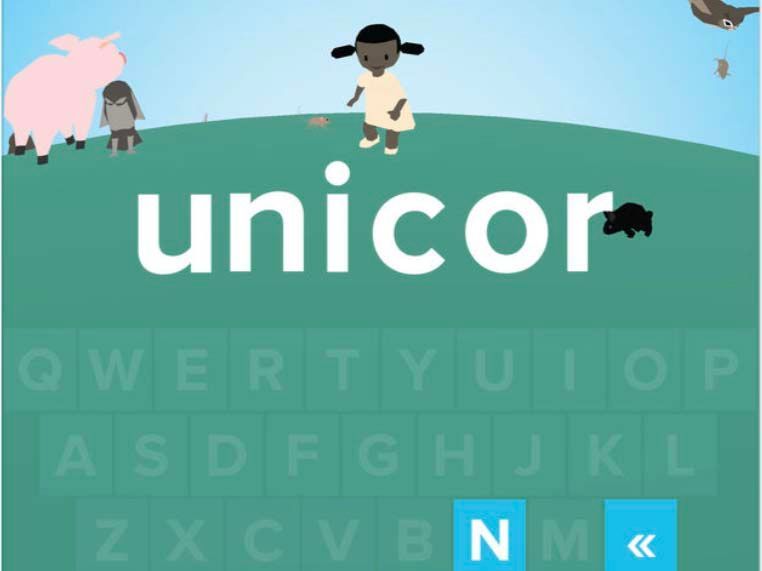 Lexi’s World is an app that introduces young children to uppercase and lowercase letters, the QWERTY keyboard, and word formation. Learners finds themselves in an empty land with a young girl named Lexi, then fill the world around her by typing words that come to life. The experience is inspired by Fred Rogers, Sesame Street, and books by Ezra Jack Keats. Lexi’s world costs $2.99.

Lexi’s World is built on the concept of signifiers and symbols. When you type "pig," a pig appears. When you type "mud," a puddle of dirty water appears and your pig starts gleefully rolling in it. The direct visual connections can help early readers (and even those who can’t read yet) understand the significance of letters.

This is a great app for those just learning the alphabet and basic spelling. After choosing a letter from the on-screen keyboard, different possible next letters are highlighted so that children are guided through the spelling of a word. Also, more words become available as you build Lexi’s world. For example, the word "box" is not available until you’ve typed "cat." This provides surprises for learners and creates motivation to continue playing.

Watching how different words interact with one another is partly what makes this app so delightful; you can make Lexi ride a unicorn you’ve created, or watch an owl swoop down and catch a mouse. You can also tap on different figures and watch thought bubbles appear over their heads showing their desires, which you can then type into existence.

While the content that exists is well-executed, it is limited. Granted, I tested Lexi’s World in Beta and it will presumably continue to grow. But as of now there are only 40 to 50 unique words available to type. Most words are related to animals, naturally occurring phenomena (rain), or actions (run), so some human-made additions would add diversity to the types of words learned in the app. It feels odd that "hare," "rabbit," "jackrabbit," and "bunny" are all options but "car" and "tree" are not,

I also found it frustrating that everything in Lexi’s World is so small. While an elephant is fairly easy to follow around, a worm or acorn disappears in seconds because of how tiny it is. Adjusting the scale or allowing a zoom-in feature could solve this problem.

Ultimately, Lexi’s World seems like a great app for young readers and pre-readers. It is pretty magical to see the words you type come to life, but it will be even more magical when the word bank grows.