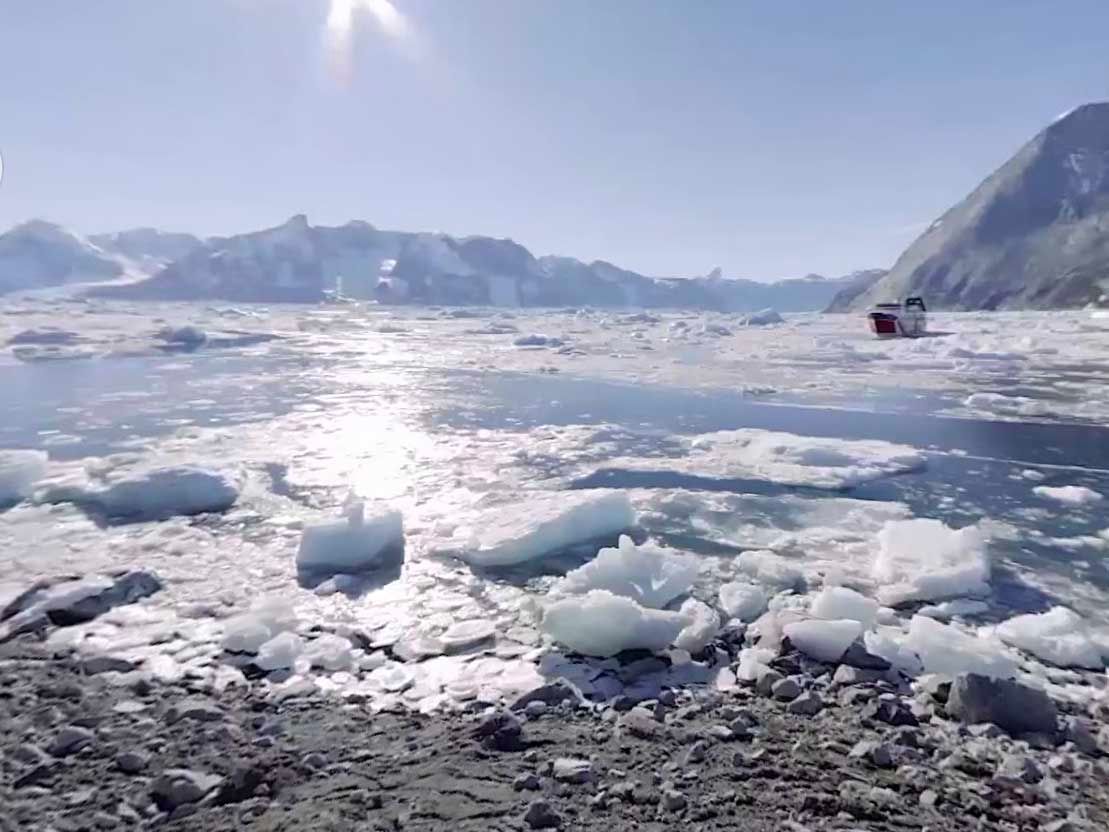 Greenland Melting is a virtual reality experience that allows users to join NASA scientists as they conduct research and discover why and how the waters surrounding icy Greenland are warming. Produced by NOVA and FRONTLINE in partnership with VR studios, this experience brings awareness to global warming in an immersive way. It requires the HCT Vive and is free to download.

Greenland Melting is essentially a virtual documentary; the user is surrounded by 360-degree landscape imagery and guided by two NASA scientists through the glaciers of Greenland. The experience was both informative and engaging, with appropriately paced narration and environment changes. It never strayed too far into edutainment. Some VR can be overstimulating or include interactive elements that distract from the main focus so I appreciated that Greenland Melting remained serious without being dramatic.

I found Greenland Melting to be a really effective way to learn about the effects of climate change. Being immersed in an environment that you can watch change over years gives you a full picture of (and greater appreciation for) just how drastic these changes are. Greenland Melting does a good job of letting you see these changes from many angles, including underwater, from a helicopter, or standing on the ice itself.

In addition to seeing changes to Greenland’s landscape, the experience lets the user hear from scientists and watch them at work tracking changes to the region’s water and ice. Learning how the information presented in the documentary was gathered helped me to understand the processes and importance of what NASA and other organizations are doing to learn about and protect our planet.

While the idea of having researchers and scientists physically present was a good idea, the execution made me question this feature. While the surrounding footage of the glaciers was beautifully clear, the images of the scientists were grainy. The scientists also often appeared suddenly and too close for comfort. I was startled and creeped out when I would turn around and suddenly find a man standing a foot away from me on an otherwise desolate glacier. I recommend adding a sound effect to signal the appearance of researchers and placing them further away from users.

Greenland Melting is a great way to get up close (but sometimes too close) and personal with scientists and research institutes that are studying how climate change is affecting our planet. Though it is essentially a one-and-done experience, it is a great free program for anyone interested in seeing what exactly is happening to the glaciers of Greenland and how the changes there are being tracked.