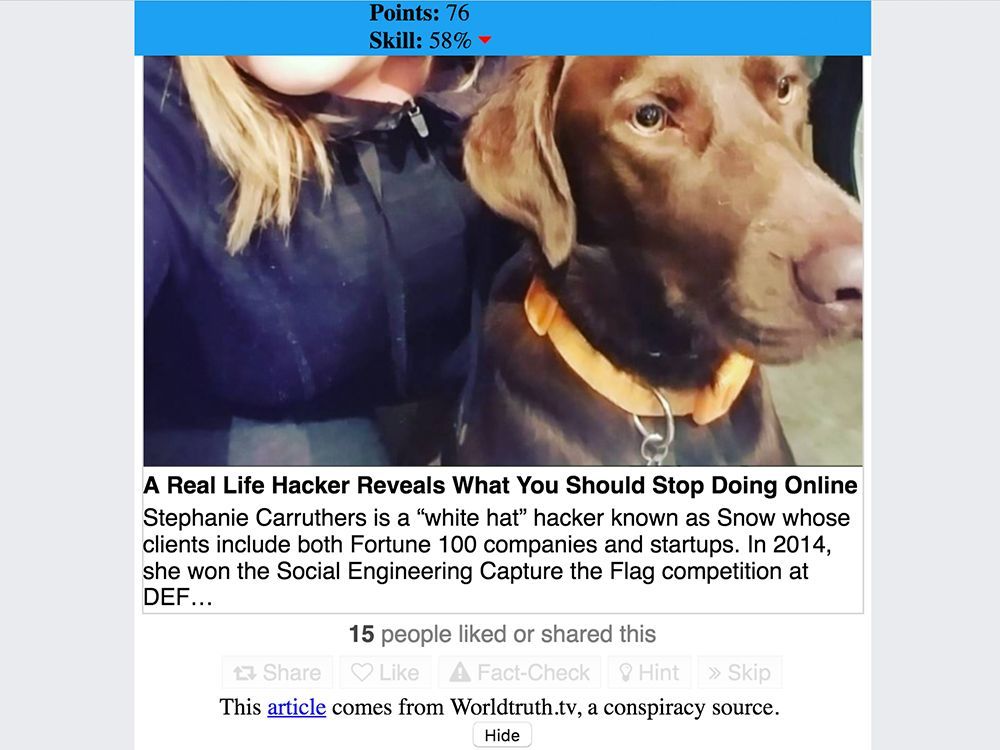 Fakey is a game that aims to teach media literacy by having players interact with a simulated newsfeed. The game was created by the Indiana University Network Science Institute’s Observatory on Social Media (OSoMe) to study how people react with real news and misinformation..

In Fakey, players take quizzes consisting of ten recent news stories and must decide how to interact with them via social media. The options include liking, sharing, skipping, or fact-checking. The strategy of the game is to like or share articles from legitimate news sources, while skipping or fact-checking dubious posts. Users can choose to play the game without signing up or registering.

When an action has been selected, the game reveals the source for the article and tallies the points as users play along. Legitimate sources come from a variety of news sites, such as traditional media, like CNN or The Washington Post, but also from new media, such as The Verge. The dubious articles have sources from real clickbait, junk science, and conspiracy sources that people commonly see shared in their newsfeeds.

The game’s basic design and content are in need of some professionalization. Currently, it is better optimized for smartphones and is somewhat awkward to play on a computer browser. Texts in the game need some basic editing, too. For instance, some of the publications were not capitalized (instead of The Wall Street Journal, the game listed The wall street journal). As the goal of this resource is to build media literacy, these kinds of issues will cause some to lose trust in the game.

Another issue that I had with the game was its choice of BuzzFeed as a legitimate source. While the website has done solid reporting in recent years, it still relies upon clickbait headlines, listicles, and quizzes. For instance, one article used in Fakey was "On A Scale From 0 To 100, How Intensely Have You Lived? Prepare for your whole life to flash before your eyes." The game considered it a legitimate article simply because it came from BuzzFeed, however, the headline is also clearly clickbait. Potentially, this distinction is more nuanced than can be conveyed through this simple game.

Fakey is a free, easy tool to help boost media literacy skills for social media. While the content is quite simplistic, it could be a nice resource for parents, teachers, or anyone looking to design a lesson, teach, or learn about the fake news phenomenon.