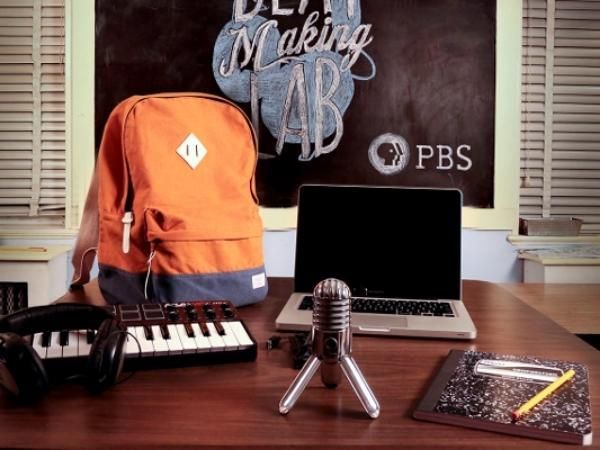 "Beat Making Lab is an electronic music studio small enough to fit in a backpack. We collaborate with communities all around the world; donating laptops, microphones and software to community centers and conducting two-week residencies with talented youth. We film workshops and shoot music videos as part of a weekly web-series with PBS Digital Studios. Our goals include cultural exchange, innovative collaboration, and social/entrepreneurial impact." (via Learn about Beat Making Lab)

Birth of a Lab
This culturally curious, international engineering studio-cum-recording workshop first took shape as an experimental course in music production at UNC-Chapel Hill. By 2012, course stylists Mark Katz, Stephen Levitin (DJ Apple Juice Kid), and Pierce Freelon had big aspirations for turning their curriculum into a program for community learners, to bring digital recording skills to the masses and exchange knowledge through music across cultural borders. They then developed the independent studio ARTVSM, LLC and Beat Making Lab, a transient instance of digital tools and musical expertise, was born.

Global Experiments
Some crowd-sourced funding, strategic partnerships, YouTube, and a whole lot of underground beats have turned this Carolina class into a global phenomenon. Beat Making Lab’s first real success with Yolé! Africa, a cultural exchange organization in the Democratic Republic of the Congo, also became the first episode of a PBS Digital Studios online series that would later capture other collaborations with groups in Panama, in Senegal, in Fiji, and elsewhere. The music lessons imparted in these exchanges with Apple Juice and Co. have a tangible "teach-a-person-how-to-fish" ethic, meant to empower individuals to learn and to share with their community just how to explore their musical heritage with the twenty-first century technologies available to them. In return? Gorgeous, gorgeous beats that not only explore but innovate.

What’s cooking?
A May 2015 Levitin update shows big things ahead for his team: imminent collaborations in India, a real television pilot, corporate partnerships to beef up their digital capacities, and resources toward building better PR for establishing Labs at home and abroad. Stay tuned.