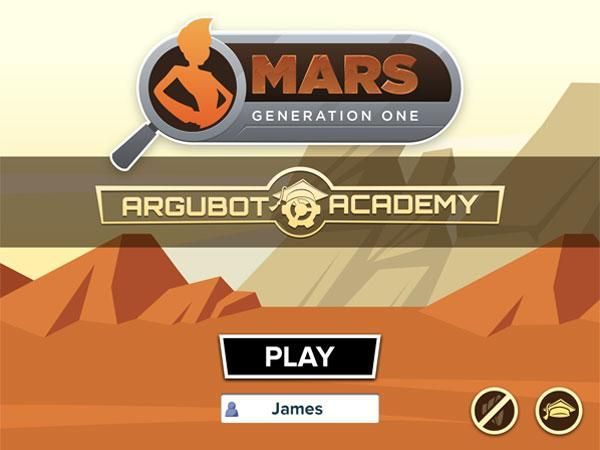 Mars Generation One: Argubot Academy is a language arts game for tablets developed around STEM topics. This game is produced by well-known educational gaming company GlassLab in collaboration with National Writing Project and NASA. In the game, players assume the role of an earthling new to Mars in 2054 and a student at the Red Rock Academy. Players have to learn how to build solid Argubots—a gamified plot device to construct arguments with clear claims and supporting evidence—and use them to duel with others in the academy. Along the way, players explore the school and meet different people, collect data, and gain new science knowledge, and then apply it to address issues facing members of the Martian community.

Learning critical thinking skills and crafting arguments is well integrated in the adventurous gameplay. The design of various Argubots—Authoritrons, Consebots, and Observatrons—helps students learn how to make arguments using data from experts and observations. The visualizations of Argubots are create a scaffold for students to learn about argumentation. There are professional development resources and suggested lesson plans available, and learning tasks in the game are aligned with Common Core ELA standards. These are important supports for educators who may want to use this game but only have limited time to find resources and create lesson plans.

Players have to navigate through the academy, click on various objects, and interact with other non-player-characters to collect evidence and build strong Argubots. It would be helpful to provide hints to players who might be confused by this process. Providing additional scientific resources relevant to the claims and evidence presented in players' arguments would help students learn more about science in the real world.

This one-player adventure game illustrates a great collaboration across different academic disciplines. As game-based learning becomes more and more popular, similar interdisciplinary products will provide students with engaging and integrated learning experiences. Evaluation of student learning with these innovative games, which has been part of GlassLab’s efforts, will be critical to move these developments to the next level.

This is a useful game for students to learn about science, English, and critical thinking.