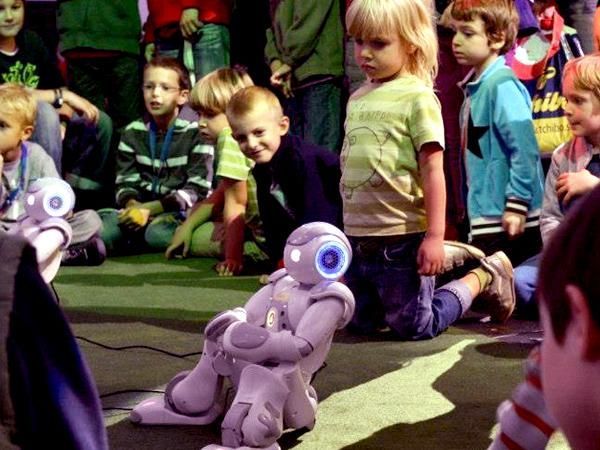 Title: Storytelling by a Kindergarten Social Assistive Robot: A Tool for Constructive Learning in Preschool Education (2014)

Research Question: Can preschool students learn through interaction with a robot?

Study Design: The study analyzes young students’ engagement levels with an interactive robot designed to be used as a classroom assistant. Researchers developed an application called KindSAR, which is a type of social assistive technology specifically designed for educational purposes. This application was loaded onto a small humanoid robot called NAO, previously shown to have positive interactions with children. The experiment was conducted in a kindergarten classroom with ten children (five boys and five girls) ages 3-3.6 years. A short, preliminary introduction of NAO was conducted with five students, one teacher, and one technician. NAO was placed in a sitting position near students and "woke up" by yawning and getting to its feet. It introduced itself and explained that it was there to play with them. The little robot then went closer to each student and conducted brief conversations. After a short, successful game of "Simon Says" the introduction was ended.

A week later, NAO was brought back to the kindergarten and five students were invited to spend the day with the robot. NAO introduced itself to the students and explained that it would be telling them a story. Two well-known short stories were chosen and the students listened to NAO recite the prerecorded tale. During the story, the robot taught the children new concepts, asked questions, and gave positive feedback to those who answered. During the experiment, NAO constantly moved, showed expression (bodily and vocally), and changed the color of the light in its eyes.

Findings: In order to determine the success or failure of this experiment, many factors were considered. Eye contact and the affective factor (facial, body, and vocal expressions of emotion) were analyzed to determine the student interaction levels with the robot. Additionally, researchers measured two types of performance: cognitive performance (where the robot teaches the students new concepts) and motor performance (where children play a motor game with the robot). The study demonstrated that a robot could assist teachers in constructive learning processes like storytelling, new concept introduction, and motor skills. The storytelling robot was able to promote the "children’s emotional involvement in the learning process."

Moving Forward: Humanoid robots are slowly making their way into more classrooms, transforming traditional learning processes and getting children excited about technology. When combined with applications like KindSAR, robots like NAO have the power to assist teachers and educators in the classroom by explaining new concepts and promoting interactive, collaborative learning processes. The researchers in this study stress that robots are not intended to replace teachers, but are designed to help augment the learning process and aid the teacher in anyway they can. The possibilities for educational uses of robots will only increase with further developments in hardware and software.

Image: Children and Nao at Researcher´s Night 2012 by Center for Intelligent Technologies via Flickr