So for the past three months of so I have been serving as Chief of Staff and Chief Strategist for the Mike Gravel 2020 Presidential campaign, which I launched with my high school friend David Oks. The campaign aims not to get the 89-year-old leftist former senator Mike Gravel elected president, but instead to push the conversation in the Democratic primary to the left, particularly on issues of electoral reform and foriegn policy. We were recently profiled about the campaign in the New York Times, which discussed the nature of our work as a surreal pseudo-campaign, where on one side is the real man Mike Gravel and on the other is the symbol of Mike embodied by our Twitter account @MikeGravel which has attracted the bulk of our support and donations (now summing around 47,000 individuals and $183,000). Mike—the man—supports what we’re doing and is elated that he’s once more in the political conversation, pulling the party leftward. But Mike the idea is much more than that: to many, it represents how politics is changing, and the extent to which movements and ideas are coming to matter more even than having real people as candidates. I see our work as a heavily online campaign to be focused on appealing to the young and dispossessed as a facet of changing the role of technology in our society.

Pursuant to this work, we’ve gotten a lot of attention from activists and political operatives on the left. Out of the blue, we received an invitation to Bernie Sander’s marquee invite-only speech on Democratic Socialism and what it means to him. Then, Alexandria Ocasio-Cortez’s Chief of staff got in contact with us, and said if we were around we could come in for a meeting. We were floored by the opportunity, and booked train tickets for Wednesday, June 12th, planning to get it all done in one whirlwind day.

At 5:00AM yesterday, I woke up, showered, and met up with David to head to Penn Station for a 6:30AM train to D.C. I wore my one nice shirt, David his, we got coffees and settled into the train, working away on our laptops on a strategy memo (trying to do a collaboration with the Andrew Yang campaign) and talking over and over the day’s plan. Pretty soon though we both fell asleep, not quite ready for what was ahead. Groggy and sore, we walked out into the sun from Union Station and immediately walked towards the Capitol. AOC’s office is in the House Cannon Office Building, room 229. And to our considerable surprise you can just walk right in to this building so long as you look like you have somewhere to be and walk through a metal detector. 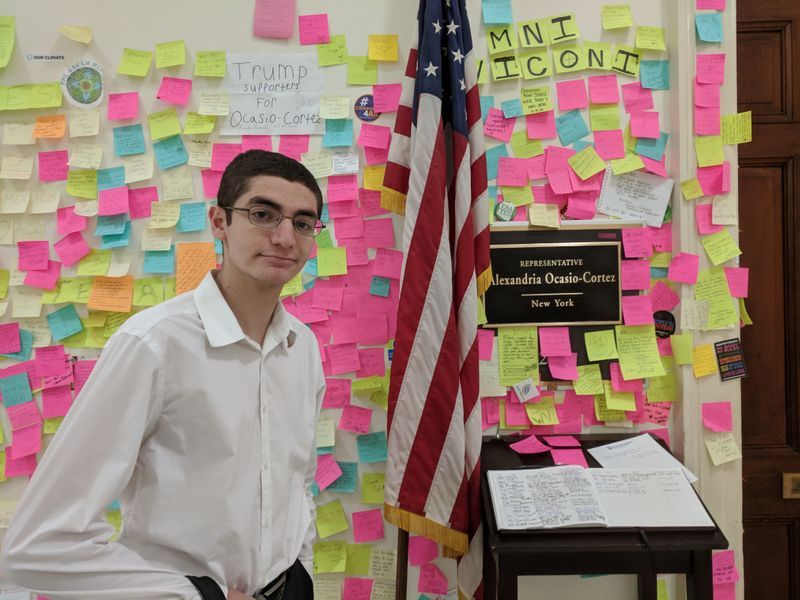 David outside of AOC's Office

Some wandering around led us to the right spot, in fact you really can’t miss it. Her office is absolutely surrounded by thousands of post it notes, pieces of paper and well wishes of all kinds. By all accounts she is the most popular person in Congress, at least among the activists who wander the halls and slip in and out of Capitol buildings regularly. Her office was busy and loud, we had a meeting with her head of policy but he had warned me that today was “one of the six or so days a year where something actually happens on the Hill” because a major appropriations bill was on the floor. We chatted with staff at the front desk and had a very brief encounter but they were too busy for much talk. Pretty understandable, she is a member of congress and we gave them less than three days warning. They told us we should come back another time and that they still wanted to speak to us.

We regrouped at the cafeteria, looking through our list of contacts to see who we might use as an in into a congressional office. This proved difficult on such short notice, so we returned to strategy discussion and had a quick call with Mike himself. Pretty soon it was already doors open at the main event so we headed out to George Washington University. The speech was in a small theater, and closed to the public. We got our wristbands and walked in. It was a chaotic scene, dozens of camera, journalists lined up on laptops, a gleaming stage and podium, and an audience of leftists from across the country: Bhaskar Sunkara (the Editor of Jacobin Magazine), Lee Carter (a Democratic Socialist in Virginia’s House of Delegates), Nina Turner (State Senator and Bernie surrogate), Linda Sarsour (Palestinian-American activist), and dozens of others. We were pretty starstruck, but went around speaking to whoever we already knew and trying to make friends. The lights dimmed, we sat down, and Bernie walked out and started on a rousing speech. 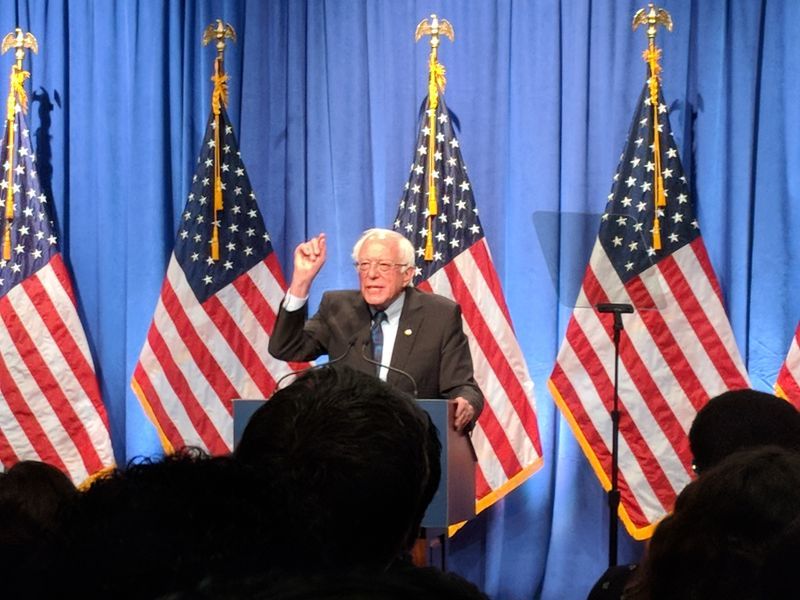 He brought together the fight for economic justice and the fight against authoritarian nationalism. He situated Democratic Socialism in the historical context of FDR and the New Deal, cited the massive Nazi rally which took place in Madison Square Garden, NYC in 1939, and how the right has called just about every progressive effort in history “socialism” whether the term fit or not. He railed on the absurd inequality of the nation and talked about fundamental change. The audience could not have been more supportive, we jumped to our feet several times, chanted “Bernie,” and the atmosphere was electric. It felt like the beating heart of a movement, a group of people who were committed to something revolutionary and transformative, like an idea whose time has come.

He finished, the applause lasted quite a while, he jetted out to go on Anderson Cooper and we barely had a moment. But then the crowd milled about, discussing what was a remarkable speech. Immediately Linda Sarsour approached us and said she was our biggest fan and loved the account. Then others came to introduce themselves: Bernie staffers, advisors, and activists. Linda asked to take a photo with us, we took photos with another half dozen people. We ran into Nina Turner and were introduced, she thought the whole thing was hilarious. Then we talked to Lee Carter about the future of the online left and posted a photo of us with him on Twitter which got 2.2K likes. It was an exhausting hour or so, and finally we headed out. On our way we got another call from Mike, he had just spoken to Ralph Nader and Nader wanted us on his podcast to talk about youth in politics. 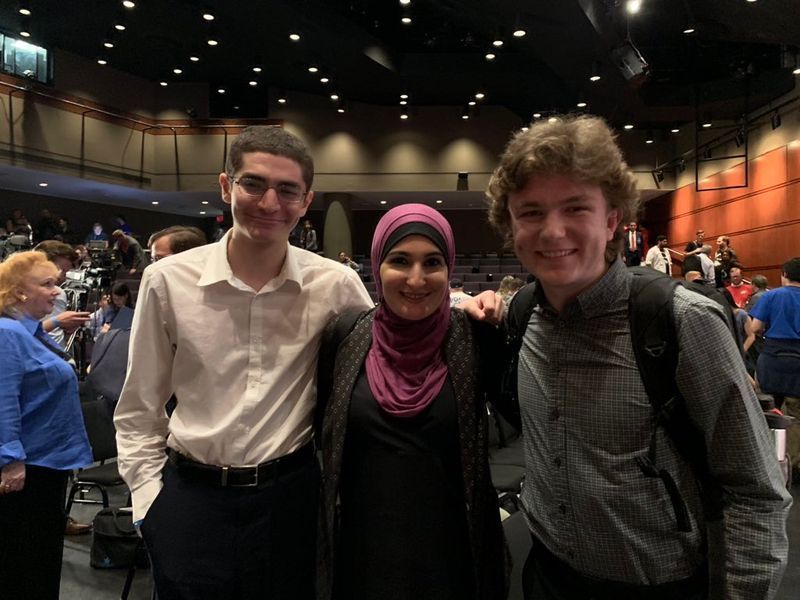 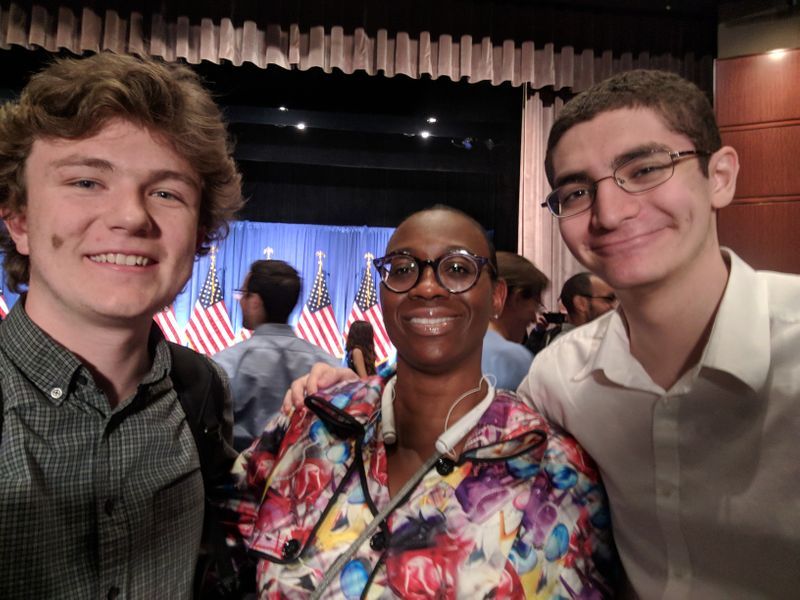 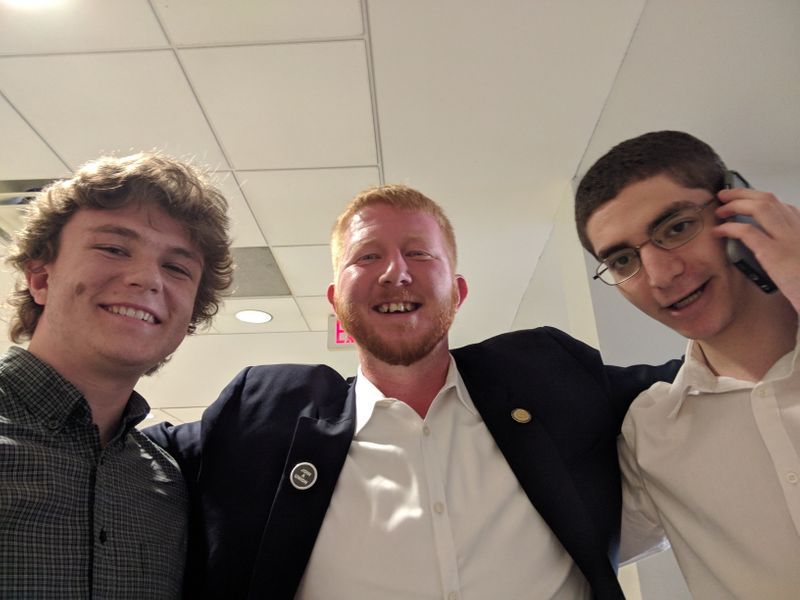 We met up with our campaign’s Comms Director and Advertising Director at an ethiopian restaurant. The two of them are twenty something D.C. grad students, working for free (like us), writing press releases, doing press appearances and taking meetings with the many people who’ve been emailing. We workshopped the next steps for the campaign: a donation push with Yang, a Biden attack ad, and an exit strategy for after the first couple of debates. They couldn’t believe how strange we were (and how young). David and I have something of a bizarre back and forth: mean jokes, references to the news and our favorite books, and a bit of a curmudgeonly way of being. Finally we went to catch our train. 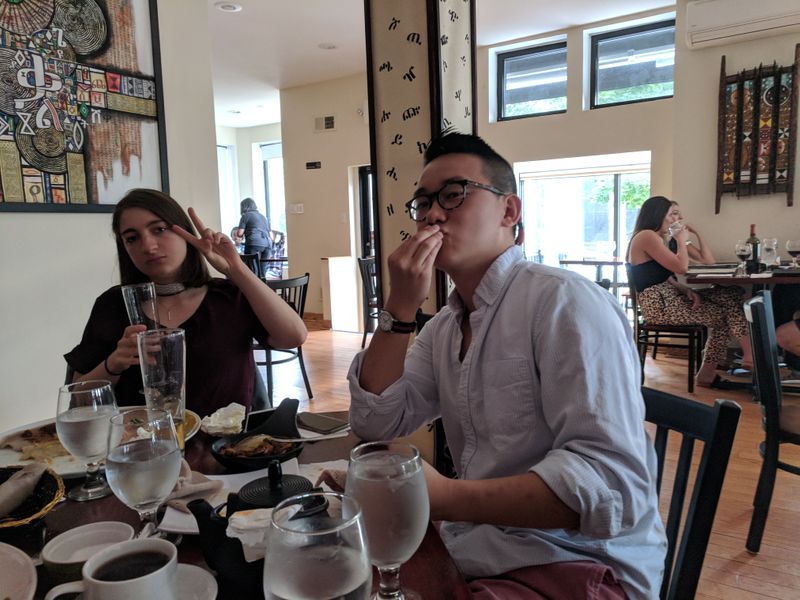 With Kathryn and Frank (Comms and Ad Directors)

In another crazy turn of luck we ran into the Bernie staff as they went to catch their train. Bernie’s National Political Director expressed how great she found the whole thing, and gave us her card to follow up on an endorsement in the long term. We said goodbye to our new friends and got on our train, where we both immediately passed out. We rolled in to NYC at 2AM this morning, I stumbled to bed and then woke up to come in this morning. David has been following up with everyone we met on email today and we’re sending our memo to Andrew Yang. As it is, the campaign has more momentum than at any point before. A few more good days will get us to 65,000 donors, and hopefully all the way to the democratic debate stage.