Concept of the Collection

As we gear up for mid term elections, we take stock of the electoral process and drawing of boundary districts in the United States. It’s been happening since 1812, when the Governor of Massachusetts Elbridge Gerry signed a bill that redistricted his state to benefit the Democratic-Republican Party or the Jeffersonian Republican party to which he belonged. When Gerry redrew district lines for the upcoming senate election, The Boston Centinel lashed back with a political cartoon depicting a poisonous creature, the salamander, symbolizing fiery transformation over the Essex South state senatorial district.

To manipulate political districting for gain or advantage is to unfairly disenfranchise certain groups of people from the democratic process -- some might say, rendering government effectively unconstitutional. New York, North Carolina, Florida, Louisiana, Texas, Ohio, and Maryland are no strangers to the practice of gerrymandering, evident by past elections.

What lies ahead in our turbulent political times and what should we do about the upcoming vote? With primaries just under our belt, Dear Mr. Gerry: Meandering Into Elections draws attention to this critical issue from both an historical and contemporary lens.

To show the concept visually, we found The Gerrymanding Project by FiveThirtyEight about Gerrymandering in New York State, based on which we made a voting booth where audiences can press the three buttons and clearly see the changes of the bundaries. Inspired by carnival games we created a whole scene with stars and signs and also made e-books display possible. 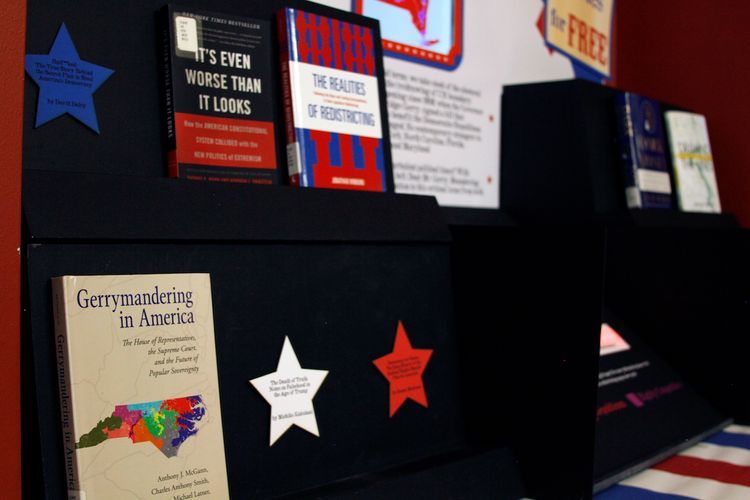 More Photos of the Display The Gerrymanding Project by FiveThirtyEight for the data research, maps, and mapped data visualizations about Gerrymandering in New York State

Katherine Hoskins for being in the video