As SpaceX blasts off a car into space, headed toward Mars, the curtain begins to close on the “Out of this World” Mars experience in the Learning Theater. This March we are projected to send the final groups of colonists out to redder pastures. So it’s time to start thinking about what the next big edu-taining experience for the LT space might be. I spent some time pondering the future of the space and here is a pitch for a possible way to transform the 4th floor in the coming months.

It is time to look ahead to the future by traveling to the past.

Guests enter the lobby to find Pompeii, circa 79AD. The space is set up much like the Basilica, in its original glory. The space was used back then as a place of business and commerce. They are given a colored rubber bracelet with a logo to wear during the experience. Visitors mingle with each other in the space. Then suddenly we hear the eruption begin and you can tell something is going on in the distance. Actors (played by EdLab staff) in the lobby area are certain it is Mt. Vesuvius. Perhaps a black and white/vintage style video plays on the wall after the initial rumbling begins:

“It's August 24th, 1:30pm in Pompeii. Mt. Vesuvius has just erupted about 5 miles outside of the city. We still have time to escape. But we must first grab the things that we need to take with us. We don't have much time to gather our belongings and leave. Please stick with your family/group and head off to your home or business in the square to decide on the essentials that you can pack. Welcome to Pompeii.

The head of the group, a townsperson (played by EdLab staff), leads them through the doors. The doors are opened to the main hall of the Learning Theater, where the visitors enter into Pompeii's bustling marketplace with shops (bakery, granary, spa, etc), Temple of Apollo,  and homes off to the sides. Farther off in the center is the amphitheater.  In the middle we see the Arch of Tiberius. In the distance (on the back wall) you can see and hear the volcano slowly erupting. Time is of the essence. Based on the logo on their bracelet, they head to a specific area, home or shop, where they will work together to get out of Pompeii.

GAME 1: What to bring: a game where we learn about the people, places, times and culture of Pompeii

Inside their shop, granary, school or cafe, teams must work together on a game that helps them figure out what they can pack with them and can carry out of the city as they flee. In this game we learn about the different types of objects in the spaces, understanding what types of tools, crafts, art, language, foods etc, that the people of Pompeii used at the time. Each team learns about a different location and the objects and world in those specific places. (With different rooms and locations to discover, each experience through Pompeii in the LT will be different for the visitors)

Visitors exit their hubs back out into the open street/cobblestone marketplace area. All the while, Mt. Vesuvius continues to get stronger in the background. We learn that debris is hitting the northern part of the city and we must all gather in the amphitheater to pick our direction to head. It is evening time now

GAME2: Geography & Strategy: Understanding the location of Mt. Vesuvius's potential destruction and choosing and exit strategy as a group

The town leader brings them to the Amphitheater, or the area in the back of the theater, directly in front of the wall projection of Mt. Vesuvius. Together everyone must decide which direction they will head when they leave Pompeii. The objects they have selected to take in the previous game will affect how much weight they have and how much time/distance they can cover based on the mode of transportation. (They will be given their options for transportation). There will be a giant map on the floor with game pieces in the shape of cobblestones that allow them to chart their course. While this game unfolds, the Volcano grows stronger, tensions mount. We hear the area we left early cover with rubble and debris.

Finally they choose their direction. The direction they choose plays a role in their survival later in the experience.

It is around morning, as indicated by a sound byte or visual indication in the space. At this point the "pyroclastic surge" hits with 100mph force of lava and debris covering the city now up 19-23 feet. The back wall projection shows this climax of the eruption and devastation of the city. 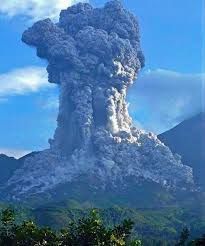 The room goes dark in a black out.

The room slowly crescendos with light, with the back projection, other scenic lighting and projections indicating that we are in an excavation site. It is in 1748, the year the first explorers uncovered the City of Pompeii - untouched and preserved for all of these years. The back projection shows a slightly excavated city. A small video catches them up to what year it is and who they are.

"1700 years ago Mt. Vesuvius erupted, killing 2000 people and destroying the cities of Pompeii, Stabiae, Herculaneum and Torre Annunziata. Those who chose routes to those cities were most likely covered in debris and lava,  but those who chose the the routes to Neopolis, Surrentum and Salernum were able to reach safety. (This is where the group realizes if they had survived based on their earlier choices.) "

The leader of the group is now head explorer and brings them up to speed:

"Here we are in 1748, and we are the first explorers to uncover this untouched and preserved city. Let's go out there and find out what we can about these lost people and lost history."

The entire space has been transformed into an archeological dig. The amphitheater, the shops, the school, the spa, cafes, etc are all in the same places, but the lighting and projections show that they are now a dig site ready to be explored.

The entire space of the learning theater has been transformed into an archeological dig site of Pompeii and each visitor is now an archeologist setting out to uncover the hidden history of this city. They break off into groups of 3 based on the color or symbol on the badge/bracelet (different from previous grouping). They explore the space freely, heading to the amphitheater, the arch, the forum, etc. Each location has projections, decor and lighting that show it as city ruins. A few iPads in each location has an augmented reality app, where teams can search the space, scan over objects or visual cues and learn about real places and people from that specific location that were lost forever on that fateful day. For example in the cafe we will learn about people found in cafes in Pompeii or in similar locations of business. We will learn about objects that were found and what they were possibly used for. The Amphitheater will offer different historical information but based on what was uncovered at that location. Voice over from the videos plays throughout the space, as the lights slowly dim.

"Mt. Vesuvius last erupted in 1944 and it is only a matter of time before it bubbles up again. In fact researchers say it could be any day now."

The leader then cuts in.

"Okay explorers, lets get out of here before it's too late."

S/he opens learning theater doors to the lobby.

Visitors exit back to the lobby, where they receive a commemorative bag of Learning Theater Biscotti.

Throughout the first two parts of the experience, as mentioned, the volcano can be heard and seen, and continues to grow in force. There is also a time-of-day reminder somewhere in the space, so visitors can gauge what time it is when the events are panning out. Perhaps the time of day can be indicated by lighting. Lighting can also be used to indicate how bad the air quality becomes over time, as people in Pompeii initially died from the debris and air quality, before getting covered with the massive flow covering the city. A good place to look for inspiration on this is the Forum Shops at Caesars Palace. The sky changes over time indicated the changing time of day that leads to a show time when the sky darkens.